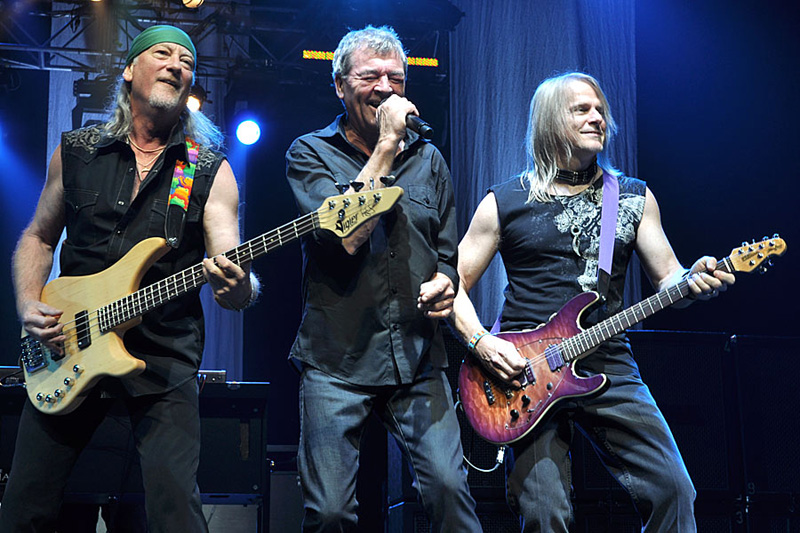 After a long absence from the recording studio, Deep Purple are set to release a new album titled ‘NOW What?!‘ on April 30 — and from the sound of the single ‘Hell to Pay,’ they might have come pretty close to their stated goal of returning to the classic Deep Purple sound.

The revitalized classic rockers recorded the album in Nashville with famed rock producer Bob Ezrin, whose legendary list of credits includes Kiss (‘Destroyer’), Pink Floyd (‘The Wall’), and a stack of early Alice Cooperalbums, among many more. ‘NOW What?!’ features 11 new tracks, and a press release states the album “was recorded with no musical rules, and it shows a modern and fresh production . . . to the point that Deep Purple have never sounded so close to the spirit of the ’70s in the last 20 years as they do now.”

That doesn’t mean that ‘Hell to Pay’ is the second coming of ‘Smoke on the Water,’ but the track is certainly closer to the spirit of classic Deep Purple than the other track we’ve heard from ‘NOW What?!,’ a somewhat down-tempo song titled ‘All the Time in the World.’ The two songs are slated for release as a double A-side single on March 29, but they are as different as night and day.

‘Hell to Pay’ features a guitar/organ bed track that is definitely a deliberate musical reference to Purple’s musical past — to the point that guitarist Steve Morse and keyboardist Don Airey seem like they are deliberately trying to imitate their successors in the band. Not that that’s a bad thing — the result is a satisfying mix of old and new that should please Deep Purple fans who want to hear the band rock.

That said, there’s really no getting around the fact that Ian Gillan’s voice sounds very different than it did when he was younger. He’s singing in his mid-range here, and sounds like he’s straining even in the higher parts of that limited reach. He certainly delivers a more aggressive vocal than he did on ‘All the Time in the World,’ but if you’re looking for the kind of vocal gymnastics that characterized past Purple outings, then you need to pull out your old records and listen to them.

The highlight of the track is a typically inventive guitar solo from Morse, who rose to the seemingly impossible challenge of replacing Ritchie Blackmore in Purple by steadfastly playing the guitar as well as humanly possible over a long period of time. The song’s main guitar riff sounds like classic Deep Purple, but Morse’s solo is so indicative of his unique signature style that it could have been lifted from any of his other projects — and that’s a good thing, since his playing makes most other rock guitarists look like amateurs posing as musicians.

In the end, it’s pretty unlikely that ‘Hell to Pay’ is going to replace ‘Highway Star’ as anyone’s favorite Purple track — but it’s still a worthy addition to the band’s overall output, and better in most respects than most of the new music that classic bands are putting out today.

Anthrax drummer Charlie Benante revealed to us exactly how the group chose ‘Smokin” for inclusion on this collection: “We were on tour, on the bus talking about putting the EP together, what songs we had started recorded that we would going to dust off and finish, and what songs we wanted to record. I remember I was was wearing a Boston t-shirt, and someone said ‘how about a Boston song?’ We didn’t want to do a song that was obvious, and when ‘Smokin” was mentioned, we knew that was the song. One of the great things about ‘Smokin’ is that there’s a really cool section that has a real ‘Anthrax-y’ feel to it, the guitars and drums and playing the same type of rhythm, the kick drums are going with the guitars – I immediately heard in my head what we could do with it.”

As fans of the original song are surely thinking right about now, ‘Smokin” features an extremely prominent keyboard part, something Anthrax isn’t exactly known for incorporating in their own music. What to do? Back to Charlie: “We had thought about having the guitar play the keyboard parts, but Jay Ruston [co-producer of Anthems] brought up the idea of bringing in his friend Fred Mandel to play them.  Fred’s played with Alice Cooper, Pink Floyd, and Cheap Trick, and he absolutely nailed the keyboards for ‘Smokin’. I’m so happy he did them, it really makes the record.  I love the track, it’s upbeat, it’s fast, and it’s smokin’.

Benante and artist Stephen Thompson also created six different alternative covers for ‘Anthems,’ each one an “Anthrax-ed” take on the original song’s album cover art. As you can see they did a terrific job with the iconic image from Boston’s self-titled 1978 debut.

‘Anthems’ arrives in stores and at digital retailers Tuesday, March 19. Anthrax will hit the road on the ‘Metal Alliance Tour‘ — with support from Exodus and High on Fire — starting March 23 in Las Vegas, Nevada and ending April 21 in New York City.