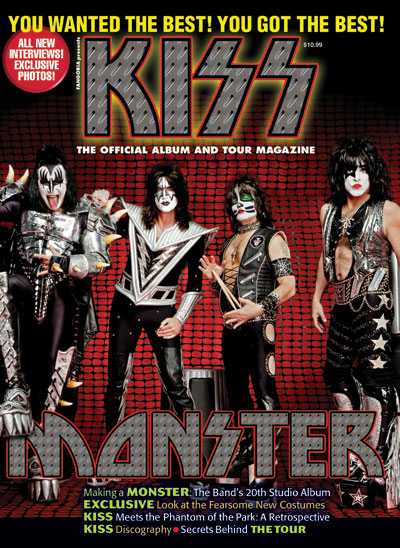 From FANGORIA, the planet’s number one cult film, horror and fantasy culture entertainment magazine, KISS: Monster—The Official Album And Tour Magazine will hit newsstands everywhere on June 26th and be sold direct via FANGORIA.com and KISSONLINE.com… just in time for the first week of the new KISS/Motley Crue nationwide tour!

A KISS magazine made by KISS fans for KISS fans, this glossy, 72 page collector’s magazine features dozens of rare, new and never before published photographs as well as brand new interviews with KISS members Gene Simmons, Paul Stanley, Tommy Thayer and Eric Singer, wherein they muse on the past, reflect on the present and look to what lies in store for “the hottest band in the world” on the cusp of the release of MONSTER, the band’s 20th studio album.

Filled with blood, spectacle, fire, passion, insight and affection, KISS: MONSTER – THE OFFICIAL ALBUM AND TOUR MAGAZINE is a souvenir no KISS fan will want to be without.