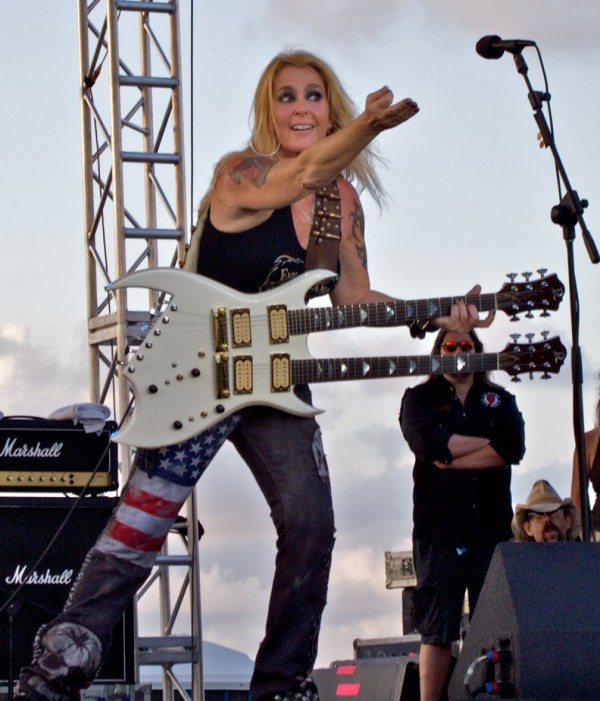 Lita Ford has signed a worldwide deal with SPV/Steamhammer. Her new album, “Living Like A Runaway”, is tentatively due in May. Best known for her work with THE RUNAWAYS and her solo career, including hit singles “Kiss Me Deadly” and the Billboard-charting duet with Ozzy Osbourne, “Close My Eyes Forever”, Lita is ready to make a return to the throne as the queen of metal.

“SPV gets who I am, my work, and what it takes to bring this project to life. I’m very excited to have them on my team,” says Lita. “Living Like A Runaway” was co-written and produced by rock guitarist Gary Hoey and represents a return to form for Lita, who drew inspiration from her “ugly divorce” from NITRO singer Jim Gillette.

“Gary Hoey and I wanted to approach this record by getting back to basics,” she said. “We want to strip away all the electronics and plug-ins and keep it to vocals, guitar, bass, and drums. Going back to basics is going back to what punk, metal and THE RUNAWAYS was for me.”

She added, “[The album title] ‘Living Like A Runaway’ means freedom and empowerment. To do what I want and to pursue my dreams while answering to no one.”

SPV A&R representative/product manager Olly Hahn commented on the signing of Lita Ford: “When I bought ‘Dancin’ On The Edge’ back in 1984, I never thought that I would ever sign Lita Ford to a label. But a dream of mine came true and it’s a huge honor for us at SPV/Steamhammer to have one of the leading women in rock ‘n’ roll on our label.”

In a 2011 interview with Classic Rock Revisited, Lita said that “Living Like A Runaway” will be her “real comeback album.” She explained,

“The last album I did was called ‘Wicked Wonderland’, I put it out with Jim Gillette, and we were married at the time. It is kind of a Jim/Lita album and not a really true Lita album. I got a lot of spiel about that. A lot of people have told me that they want a real Lita album, and I know what they mean. They are going to get it.”

She continued, “I really wasn’t that comfortable with ‘Wicked Wonderland’ — not at all, to tell you the truth. There are parts of it that are good but it doesn’t sound like a Lita record. When it got released, a lot of my fans felt weird about it and said it wasn’t a Lita album. This time I want to do it on my own. The last one turned out to be more of a Jim album. We worked pretty well together. It doesn’t suck, it’s not a bad album; it’s just not a Lita album.”

Lita and Jim are the parents of two sons, Rocco and James.

“Wicked Wonderland”, the first album in 15 years from Lita Ford, sold around 2,600 copies in the United States in its first week of release. The CD landed at position No. 31 on the Top Hard Music Albums chart.