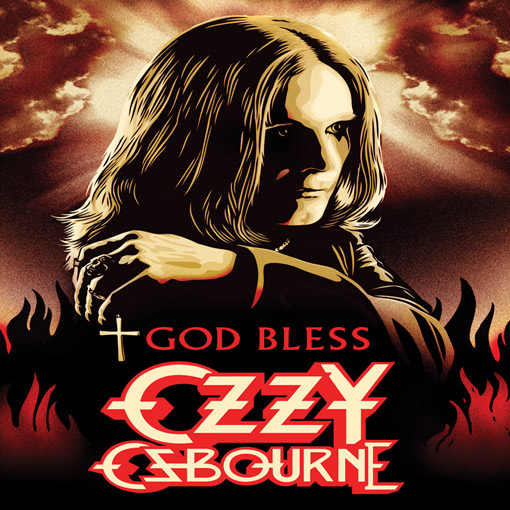 Shot over the course of three years, God Bless Ozzy Osbourne is an unrivalled look into the mind of legendary rock icon Ozzy Osbourne. God Bless Ozzy Osbourne tells the life story of Ozzy, as seen through the eyes of his youngest child, Jack Osbourne, who worked alongside directors Mike Fleiss and Mike Piscitelli. During the documentary, Ozzy recounts his troubled youth, his early career with Black Sabbath and the impact of fame and addictions on his first marriage. Viewers will also witness the second chapter of his life as a family man with Sharon, during which his addictions grew to a frightening level, as well as hear Ozzy and his children explain his attempts at staying clean, ultimately resulting in more than five years of sobriety. Music fans will also see live performances from around the world, including rare behind the scenes clips of Ozzy on and off stage, in his dressing rooms pre-show, to his nights in a series of hotel rooms. Throughout God Bless Ozzy Osbourne, audiences are given an inside look into the life of a rock star, from the good times to the bad.

The DVD and Blu-ray of God Bless Ozzy Osbourne also features additional previously unseen footage not seen in the theatrical release including new interviews, classic archive footage of Black Sabbath and Ozzy Osbourne, along with a Q&A with Ozzy and Jack Osbourne and behind the scenes footage from the Tribeca Film Festival. The New York Times (4-15-11) has described it as a movie that “unblinkingly chronicles the chaotic life and times of rock’s most notorious cut-up, from his miserable working-class childhood to his latter-day sobriety.”

Eagle Rock Entertainment is proud to announce the U.S. release of Slash’s first ever live solo album Made In Stoke 24/7/11. The double-disc CD, and a special-edition 2CD+DVD package (featuring five bonus tracks and an exclusive interview with Slash).

The iconic, Grammy-winning rock guitarist and songwriter Slash has perfected the science of the six-string for over 20 years as an integral component of Guns N’ Roses and Velvet Revolver and as a hugely successful solo artist. On July 24, 2011, he made a very special visit to Stoke on Trent, England, where he was raised, at the end of the 2010-2011 tour in support of his globally chart topping and critically acclaimed self-titled solo debut. Captured at Victoria Hall as part of an intensive world tour, this 21-song set is a celebration of a legendary career. Joined by Myles Kennedy of Alter Bridge on vocals, Slash ripped through cuts culled from his G’N’R days, Velvet Revolver, Slash’s Snakepit, and his solo album, (including the single ‘By The Sword’). His band line-up included bassist Todd Kerns, drummer Brent Fitz and guitarist Bobby Schneck.

With favorites like ‘Back From Cali,’ ‘Slither,’ ‘Sweet Child ‘O Mine,’ and many more reverberating the crowd-filled rafters, this proved to be one rockin’ homecoming.