BLABBERMOUTH.NET has received confirmation that reformed heavy metal legends ACCEPT have set “Stalingrad” as the title of their next album, due in April 2012 via Nuclear Blast Records. The CD is once again being helmed by British producer Andy Sneap (MEGADETH, EXODUS, NEVERMORE, ARCH ENEMY), who worked on the band’s critically acclaimed comeback effort, “Blood Of The Nations”.

Commented ACCEPT guitarist Wolf Hoffman: “ACCEPT and Andy Sneap have the perfect synergy. This was so clear with ‘Blood Of The Nations’ and we are excited to continue on that path. Andy is not only an amazing and prolific producer but also a very good friend who has long become a member of the ACCEPT family.”

Regarding the musical direction of ACCEPT‘s next album, Hoffmann told The Rock Pit earlier this year, “We’re just gonna have the same attitude, the approach; we’re just gonna do more of the same, you know, without it being the same. More similar-style stuff, hopefully fresh new ideas. And I mean, we’re not gonna… The intention is not to change it right now. I mean, why would we? . . . But I have to say, it’s always easier said than done. It’s incredibly difficult to write songs that are sort of reminiscent of the past but they’re not, you know, rip-offs of your own music. That sounds incredibly very simple, but it’s really not, especially if you have a sort of history of 15 albums or whatever we have. Then there are always similarities that you have to avoid. It can’t be too close, but it can’t be too far away from it. So it’s a pretty fine line that you have to walk sometimes, but, you know, hopefully we’ll manage again.”

ACCEPT‘s July 15 performance at this year’s edition of the Bang Your Head!!! festival in Balingen, Germany filmed for a future DVD release. The concert marked the band’s return to a five-piece format after the group spent a couple of months touring as a quartet due to the fact that guitarist Herman Frank suffered broken ribs and a punctured lung in a stage fall on May 6 in San Antonio.

“Blood Of The Nations” was released in North America on September 14, 2010 via Nuclear Blast Records. Recorded at Sneap‘s Backstage
Studio in Derbyshire, England, the CD marked the debut of the band’s latest addition, vocalist Mark Tornillo (ex-TT QUICK).

Capital Chaos has uploaded multi-camera footage of MASTODON performing the song “Dry Bone Valley” on November 2, 2011 at Ace Of Spades in Sacramento, California. Check it out below.

“The Hunter” was made available in several configurations that feature an exciting interactive 3D experience known as Augmented Reality. The technology, created by Los Angeles-based company Total Immersion, combines virtual and real worlds to create a 3D one-of-a-kind interactive experience that users can control. Just by using a camera on a computer, their own face and the cover art on “The Hunter”, the user can turn themselves into “The Hunter” sculpture that is pictured on the cover.

The follow-up to 2009’s “Crack The Skye” was MASTODON‘s third studio CD to be made available on Reprise Records in the U.S. and Canada and the band’s first to be issued through Roadrunner Records outside of North America.

“The Hunter” was recorded at Doppler Studios in Atlanta with producer Mike Elizondo. Drum tracks were previously completed in Los Angeles at the legendary Sound City Studios where NIRVANA‘s masterwork “Nevermind” was recorded. 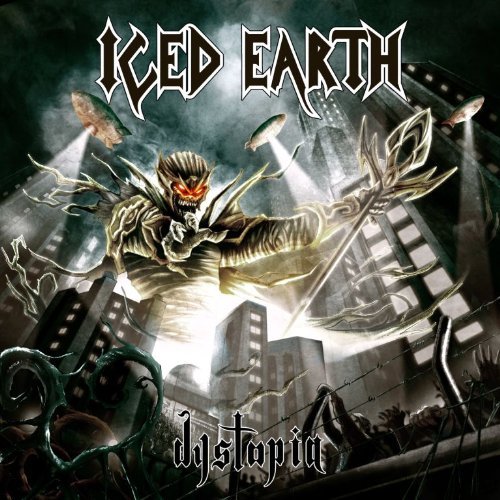 sold around 6,100 copies in the United States in its first week of release to land at position No. 67 on The Billboard 200 chart.

ICED EARTH‘s 10th studio offering, “Dystopia”, was released in Europe on October 17 and in the U.S. on October 18 via Century Media Records. Two bonus tracks were also recorded for inclusion on special editions of the album.

ICED EARTH mainman/guitarist Jon Schaffer admitted the recording of “Dystopia” was especially challenging because of the band’s summer festival gigs requiring him to criss-cross the ocean numerous times.

Despite the challenges, Schaffer said working with new vocalist Stu Block was “a pleasure.”

“You just can’t ask for a better attitude,” said Schaffer. “Stu is so excited to be here. He brings a youthful exuberance to the band, which is a lot of fun. And he’s a real dude. He’s down to earth, and willing to try anything that Jim [Morris, co-producer, engineer] or I throw at him. He’s stepping into the shoes in a very natural way.”

Schaffer continued: “We’re opening up a part of his voice and a style of singing that he didn’t even really know he had. We’re exploring this whole new range. And we’re just getting started. I believe Stu will continue to grow — and has the potential to grow — into one of the greats, one of the guys that will go down in metal history. If he stays on this course, with the attitude that he has, his willingness to learn, and his passion, he’s destined for really great things. I firmly believe that.”