Drummer Mike Mangini will make his live debut with progressive metal giants DREAM THEATERon Monday, July 4 in Rome, Italy. He states, “Rehearsing with the guys was unbelievably amazing. It was really physically and mentally rewarding. The whole crew is the most professional group ever. I’m really getting into tweaking the parts to make a mix of the recorded parts and some moves of my own that I think are just plain fun. Hearing those guys right in my ear canals is one smile after another.”DREAM THEATER will release its new album, “A Dramatic Turn Of Events”, on September 13 via Roadrunner Records. The CD was mixed by Andy Wallace, who has previously worked with AVENGED SEVENFOLD, WHITE ZOMBIE, RAGE AGAINST THE MACHINE,  SEPULTURA, SLAYER and NIRVANA, among many others.“A Dramatic Turn Of Events”track listing:01. On The Backs Of Angels
02. Build Me Up, Break Me Down
03. Lost Not Forgotten
04. This Is The Life
05. The Shaman’s Trance
06. Outcry
07. Far From Heaven
08. Breaking All Illusions
09. Beneath The Surface

In a recent interview with Music Radar, Petrucci and Rudess were asked if Mike Mangini contributed to the songwriting on the forthcoming CD. “Mike didn’t write with us,” Rudess replied. “Basically, we got in the studio and did our thing. We wrote songs and sent them to him. He came in and just nailed his parts. He’s incredible. I’m finishing my keyboard parts right now, and I’ll go to the computer to see how things are lining up, and I’m just speechless. The guy doesn’t mess up!” [laughs] “We had the demos, had them fully written out, and he learned them and added his own stuff,” Petrucci stated. “But every time he would do something, if I said, ‘Hey, can you do that again?’ he’d do it, and it would be perfect. The guy is… he’s out of his mind! [laughs] People are not going to believe how great he is.”

“But what’s really special about him is, he’s not just a technician,” Rudess added. “Yes, he plays his parts perfectly, but he comes at everything as a total musician. Everything he does has real soul and a depth of feeling.”

When asked how not having DREAM THEATER‘s former drummer, Mike Portnoy, in the recording and writing process changed the band dynamic, Petrucci replied, “It was a lot quieter. [laughs] Mike Mangini‘s playing style is different. He plays very hard, but he’s got a very deep groove. He almost plays behind the beat just a little bit — even through he’s right on the money. He’s extremely locked in, but if he does do something technical, he’s still right there.” 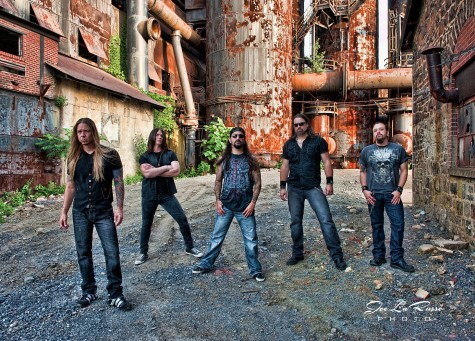 A radio-quality rip of ADRENALINE MOB‘s version of “The Mob Rules” can be streamed in the YouTube clip below.

ADRENALINE MOB made its live debut on Friday at The Hiro Ballroom in New York City.

In a March 2011 interview, Russell described ADRENALINE MOB as “a straight-up rock band with just rock songs — kind of like an edgy, modern kind of sound. It’s not progressive or trying to be too metal or anything — it’s just good, old crunchy rock stuff.” He added, “I think it will be really well received by people who like to hear that kind of stuff. This is a new thing for Portnoy and myself, too. I’ve always done kind of done stuff with AYREON, but that’s more of a vintage-y vibe, but nothing like this, which is kind of modern-sounding, almost like ROB ZOMBIE meets BLACK LABEL SOCIETY meets DISTURBED, [but] with [Ronnie James] Dio singing. It’s all this kind of craziness. So it’s definitely different and it’s cool.”

Speaking to MetalSymphony.com, Orlando stated about ADRENALINE MOB, “This band is not in the vein of SYMPHONY X or DREAM THEATER. It’s more along the lines of, say, ROB ZOMBIE, GODSMACK, DISTURBED, BLACK LABEL SOCIETY, SHINEDOWN… with
Russell‘s absolute pipes from hell and Mike just outright killing it on the kit. The guitar is really rocking and has some pretty insane moments,
but it’s a song-oriented band and that’s the most important aspect before anything.” He continued, “Russell and I have an amazing writing chemistry
together and he is one of my closest and dearest friends. It’s an absolute pleasure to work with such a great talent as Russell on every level.’ He
added, “Mike is just unbelievable. His playing is beyond words at times. He’s the utmost professional musician but also one of the nicest and coolest
guys I have ever met and played with. It’s an honor to call him my bandmate, to say the least, and I look forward to ripping it up every night out there with Mike and Russ and the guys!”