“Undefeated” is taken from the band’s new live album, “Mirrorball”, and is one of three brand new studio recordings. The new album hits stores in the first week of June and contains two discs of live material, three new studio tracks, a DVD of live performances and a documentary about life on the road with the band.

Be sure to tune in to DEF LEPPARD singer Joe Elliott‘s very own show every Saturday from 6 p.m., only on Planet Rock, on which he plays the music that inspired him over the years.

“Mirrorball” is DEF LEPPARD‘s first-ever live album and features rock classics such as “Animal”, “Pour Some Sugar On Me”, “Photograph”, “Nine Lives” and “Rock Of Ages”. The album also brings together three brand new studio tracks — “Undefeated”, “Kings Of The World” and “It’s All About Believin'” — taking their place with ease within this classic setlist.
“When we decided to do (the live album), it just got said — I don’t know by who — ‘Why don’t we chuck a couple of new songs on the end?’ ” frontman Joe Elliott told Billboard.com. “And that two became three, and in fairness it could’ve been four if we’d just had a little bit more time. But we wanted to tour this summer, so any fourth or fifth song we had brewing, we’ll save them for the next record.”

Elliott composed “Undefeated”, which he described to Billboard.com as “a very QUEEN-type vocal thing. It even features piano and stuff.” Guitarist Phil Collen‘s “It’s All About Believin'” is “a pop-rock song,” while bassist Rick Savage‘s “Kings Of The World” is “a big, epic, rock anthem that will sound great in arenas and stadiums all over the world — kind of ‘We Will Rock You’ with guitars, if you like.”

“They’re all very different to each other,” Elliott added. “They don’t sound specifically like any previous DEF LEPPARD songs, but they sound like DEF LEPPARD songs. They have to have our identity on them, otherwise they might as well be Tom Waits or R.E.M. We have a signature sound that we’re not scared of anymore.”

“Mirrorball” track listing is as follows:

“Mirrorball” will also be available online, marking the first time the band’s music will officially be made available for digital purchase. DEF LEPPARD will also be releasing their new community based website in May, which is being developed to be the ultimate DEF LEPPARD fan experience and go-to destination for all things on the band.

“Mirrorball” will be released through Bludgeon Riffola/Mailboat Records on the following dates: 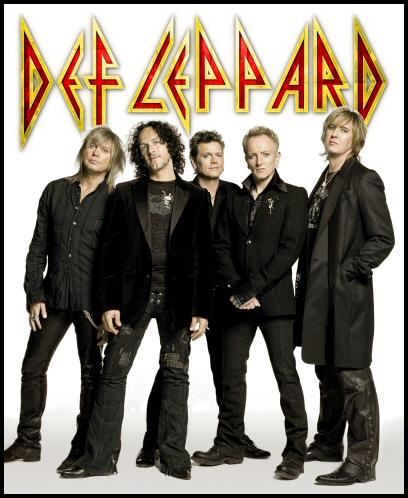 IRON MAIDEN‘s official photographer John McMurtrie has been on the road with the band since Ed Force One — the wonderful customized Boeing 757 owned by the MAIDEN, used to transport the band, its 60-member crew and 12 tons of equipment as they tour the world — first took to the skies back in January 2008, capturing not only the “Somewhere Back In Time World Tour” but also the current “Round The World In 66 Days” leg of “The Final Frontier Tour”. This extensive coverage is soon to be made available in the form of a glossy, hardback IRON MAIDEN photographic book. Tentatively entitled “On Board Flight 666”, it will be published by Orion Books later this year and will feature hundreds of stunning photos which give an exclusive, behind-the-scenes pictorial documentation of the tours. Many of the images will be accompanied by captions, allowing the reader a first-hand glimpse into life aboard Ed Force One and its groundbreaking exploits on this intimate visual journey into the world of MAIDEN.

IRON MAIDEN singer Bruce Dickinson‘s video tour of Ed Force One can be viewed in two parts below.

Ed Force One is named after MAIDEN‘s infamous mummy mascot “Eddie” and is piloted by Dickinson.

Photos of Ed Force One can be viewed below (courtesy of IronMaiden.com).

IRON MAIDEN was honored with a Grammy in the “Best Metal Performance” category in the pre-telecast ceremony at the 53rd annual Grammy Awards, which was held on February 13 at the Staples Center in Los Angeles. IRON MAIDEN was nominated for the track “El Dorado”, from the band’s 2010 album “The Final Frontier”.

“The Final Frontier” sold 63,000 copies in the United States in its first week of release to enter The Billboard 200 chart at position No. 4.

Metal Kaoz recently conducted an interview with CORROSION OF CONFORMITY bassist/vocalist Mike Dean. A couple of excerpts from the chat follow below.Metal Kaoz: The news say that you are working in the studio for a new album; so, are you in the composing process or you do you have demo versions of several songs?

Dean: We made demos of 11 new songs at our rehearsal space and Woody‘s [Weatherman, guitar] barn. Some of them were pretty close to the finished idea. I was like the tyrant of pre-production getting everything recorded to see if the ideas held up. One song, “Your Tomorrow”, we ended up releasing as a seven-inch single. Now we just finished recording everything for real with the band and John Custer producing. We’re done with all of the instrumental tracks and we’ll be finishing the vocals after this short European tour.

Metal Kaoz: If you were to describe the new music in comparison to the rest of the C.O.C., how will you do it? I mean, what can the C.O.C. fans expect for the band?

Dean: It’s going to be familiar but surprising. All of the old influences are there — hardcore, three generations of heavy rock and no rules as to how to combine them and make something new and creative.

Metal Kaoz: C.O.C. lyrics were dealing with politics and society; so, what is the lyrical content of the new album? It seems the current global economic situation is giving a lot to discuss in the lyrics.

Dean: Yeah, I’m sure singing a song will really turn things around. Ha ha ha. Yes, you’re correct; the folly of corporate-run governments and humankind in general is full of lyrical fodder. Speaking of which, we still have to write lyrics for two songs. Any suggestions?

Metal Kaoz: Are there plans to shoot a live DVD while on the road with the “Animosity” album?

Dean: Not a bad idea. Or to just make some shows available online. We tried to film a show in Raleigh, where we live back in October, but the video portion wasn’t very good. The audio turned out very well so we may add those versions to a re-release of “Animosity” or put them on our site, so stay tuned.

Metal Kaoz: This tour seems to end by the end of April and then you have some festival dates; so, what is next for C.O.C., concentrate in the new album? I mean do you have a time schedule in your mind or take things as they come?

Dean: After this short European run, we finish our album in May, play a few North American shows, then return to Europe for another month of shows, including some festivals. We will be announcing those dates soon. Later in the summer we will be out with CLUTCH in the U.S.