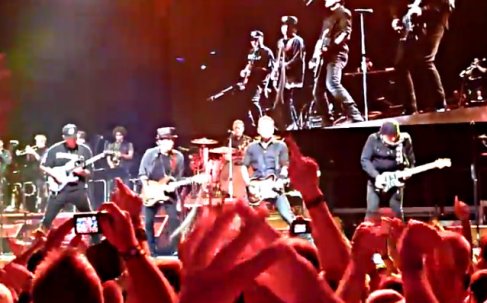 Bruce Springsteen opened his concert earlier tonight (Saturday, February 8) in Perth, Australia with a cover version of AC/DC‘s “Highway To Hell” as a tribute to Bon Scott, the late AC/DC singer who grew up near Perth in Fremantle, Western Australia. The guitar solo in the song was handled by all four guitarists in Bruce‘s band — Springsteen, Steve Van Zandt, Nils Lofgren and Tom Morello (RAGE AGAINST THE MACHINE).

Fan-filmed video footage of the performance can be seen below.

An Australian statue honoring Scott was first revealed at the Aussie Rock Celebration concert in suburban Claremont in February 2008 and was placed permanently at the Fremantle Fishing Boat Harbour in Western Australia in October that same year.

Morello spoke about prepping himself for last year’s shows, recalling to Rolling Stone, “Bruce gave me a list of 50 songs, and just to be clear, my strength is not learning music. I’ve never been particularly good at that. There are some guitar players that are virtual jukeboxes. I am not one of those. I had a list of 50 songs and three months before the tour was to begin, I buckled down and got to learning those 50 songs. It was a challenge and a great learning experience. I really got inside Bruce‘s catalog and saw the internal workings of his songwriting.”

When asked if Springsteen ever called out a tune that he didn’t know, Morello laughed, saying, “Oh, dude! Those 50 songs were just for the first show! I had three months to learn 50 songs, and before the second show he texted me seven new songs to learn. I had about an hour and 45 minutes to learn those. And the next day it was a few more. Sometimes he takes requests from the audience. People wrote those signs. Finally, I just relaxed. I think there were 10 shows over the course of that Australian tour. We played 78 songs in that time. I think I got 77 of them right.”

Morello went on to say that even though he’s played some incredibly intense shows over the course of his career, the three-and-a-half-hour E STREET BAND concerts were truly punishing: “In the hotel bar after one show we were comparing notes. I was like, ‘RAGE AGAINST THE MACHINE shows were exhausting, but the band never played longer than one hour and 20 minutes in its history.’ They were cardiovascularly exhausting shows, but the Bruce shows are orthopedically exhausting.”

When asked if he’s game to carry on with the E STREET BAND following the upcoming dates on the books, Morello said: “Hey, I have yet to say no to a Bruce Springsteen inquiry with regard to playing songs or playing shows.”