British hard rock legends DEEP PURPLE will release their 19th studio album via earMUSIC, the Hamburg, Germany-based international rock label which is part of Edel Group, on the following dates:

After various songwriting sessions in Europe, the band recorded and mixed the album in Nashville, Tennessee with producer Bob Ezrin (KISS, PINK FLOYD, PETER GABRIEL, ALICE COOPER, KANSAS). The CD is expected to contain 13 tracks, including “Out Of Hand”, “Hell To Pay”,“Weirdistan”, “Uncommon Man

“ and “Above And Beyond”. The latter song references the band’s late keyboard player, Jon Lord, in the lyric “Souls having touched are forever entwined.”

According to earMUSIC, the CD is “rumored to be the perfect match from the original spirit of ’70s PURPLE, and a fresh

Regarding the album title, Gillan offered the following cryptic comment toClassic Rock: “There’s a big question mark over the name at the moment. And possibly an exclamation mark as well. You can read what you like into what I’ve just said. All will become clear — as mud — later on. That’s all I’m allowed to say. The question mark and the exclamation mark might get you intrigued.”

earMUSIC will reveal details about the new DEEP PURPLE album in real time as soon as they will become available on a dedicated web site where all band members will also be able to post and interact with the fans:www.deeppurple2013.com. 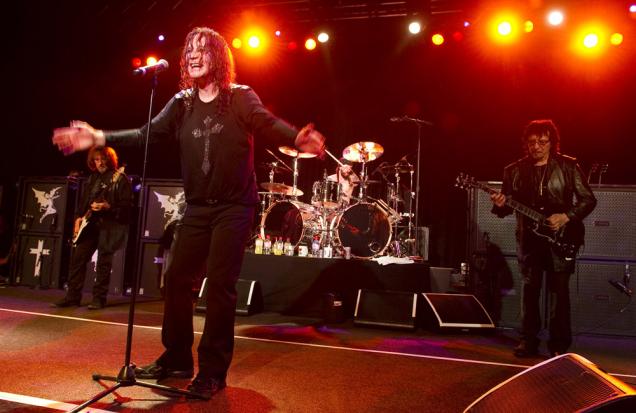 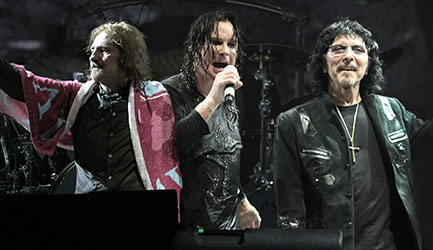 It’s official! Black Sabbath have completed recording their upcoming album, ’13.’ Sabbath bassist Geezer Butler announced the exciting news to Eddie Trunk in a video interview (seen below) at the NAMM convention, in addition to offering an update on guitarist Tony Iommi‘s current battle with cancer.

In the interview, Butler spoke all about all things Black Sabbath. “We’ve finished recording it,” reveals the bassist of the album. “Tony’s back in England putting down a couple of solos. Then we start mixing it in Febraury and it will be out in June. The provisional title is ’13′ — unless we can come up with something more constructive. I’ve written most of the lyrics. Ozzy comes up with the titles and then gives me an inspiration to write the lyrics. I think we’ve got 16 songs and I’ve written 14 sets of lyrics.”

Butler also updated fans on Black Sabbath’s touring plans. And guess what folks? They’re going all over the world! “We start at the end of April in New Zealand, then we go to Australia, then Japan,” begins the bassist. “June, we’ll be promoting the album, then July and August [is] USA. Then October is South America and Europe in November and December.”

Black Sabbath were planning on touring extensively in 2012, but the lymphoma diagnosis of legendary riff master Tony Iommi stalled the heavy metal band’s plans. However, Butler has good news to spread about Iommi’s health. “[Tony]‘s doing well; he’s really responding well,” Butler assures. “He has to go and have his medication every six weeks. But yeah, he’s really coming along well; he’s really doing well.”

As for who will be drumming with the band, that is still not determined. After original drummer Bill Ward left the outfit over contract disputes, Tommy Clufetos filled in for the few shows that Sabbath played last year. However, Rage Against the Machine drummer Brad Wilk plays on the actual album. “We’re not sure yet; we don’t know. ‘Cause I think Brad’s got commitments with Rage Against the Machine. So it’ll probably be either Tommy or Brad, depending on their commitments.”

So does that mean Rage Against the Machine might be touring in 2013, too? Fingers crossed!

But getting back to Sabbath, if everything goes to plan, 2013 should be an incredible year!

In a tweet earlier today, Mustaine wrote: “[I] played guitar, sang, and did minor adjustments yesterday to songs one-four. Mixing has begun and you’ll have something soon to hear! I’m so pumped!!”

Speaking to Full Metal Jackie at last month’s NAMM (National Association Of Music Merchants) show in Anaheim, California, Mustaine stated about the direction of the band’s new material: “[MEGADETHbassist] David Ellefson is one of those guys that’s kind of the barometer of the band. You ask me, you never really know what you’re gonna get, but when you ask David Ellefson, it’s kind of like reading the ingredients on the back of something, ’cause he’s such a straight shooter. He told some people the other day that this is music that’s really similar to [MEGADETH‘s 1985 debut album] ‘Killing Is My Business… and Business Is Good!’, some of the stuff — really dark, really heavy and fast stuff. I mean, I don’t thnk it’s really as fast and heavy as ‘Killing’ is, to me, but Junior is a great, like I said, barometer — bad word, but he knows what’s going on.”

On the topic of MEGADETH’s current label situation, Mustaine said: “We have a new label. We left Roadrunner; we completed our contract with them, which not a lot of many metal bands have the luxury to have been able to complete contracts. They usually either break up or quit or give up and stuff like that, but we were honorable and finished our contract with them and we moved on. And we’ve actually got a fantastic relationship with a brand new label that we’re gonna be telling everybody about real soon. We have eleven songs already recorded. We wanna give them thirteen, ’cause, you know, the B-sides and Japanese releases and all that kind of crazy stuff.”

In a January 24 post on his Facebook page, Ellefson wrote about the recording process for MEGADETH’s new album: “Having a great week here at Vic’s Garage laying down bass on the new songs. Really some great, great songs taking shape at this point in the recording process. I told Dave [Mustaine] today that one of them totally reminded me of the earliest stuff back when we first met. Fast, ripppin’ and fully bringing the REAL old-school MEGADETH sound!!!”