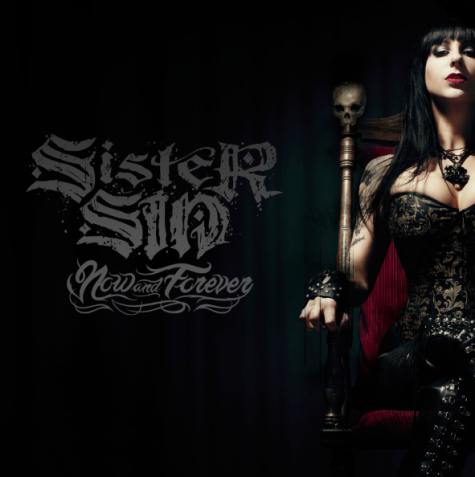 SISTER SIN‘s third album, “Now And Forever”, entered the official chart in the band’s home country at position No. 44. Released on October 23 viaVictory Records, the CD was recorded at Standstraight Studios in Stockholm with producer Chris Snyder and was mixed by Cameron Webb(MOTÖRHEAD, SOCIAL DISTORTION, DANZIG).

The “End Of The Line” video can be seen below.

In a recent interview with Loudwire, Jagrell stated about the track, “It’s a really good first single, I think, because the whole album is in that style. It shows a different side of SISTER SIN because we actually have some keyboards in this song and on some of the other songs, too, and we worked both on the dynamics and on the melodies in a [different] way than the previous album.”

She added, “On this album and on that song, we thought a little bit out of the box and experimented and tried to go out of what our comfort zone is. I think it turned out really good. I’m happy with the album and that song.”

Regarding the song’s the lyrics, Jagrell said, “It’s about the kinds of scams, political and religious scams and people everywhere trying to tell us the world is going to end but we really just want to try to live today and not to live for tomorrow or for things that might happen. It’s satirical a little bit towards all of those people trying to say what we should do and not do.”

Asked what the album title “Now And Forever” means to her, Liv said, “The title ‘Now And Forever’ is kind of a statement for us as a band. As a band and as individuals, we have been through quite a lot of things, a lot of troubles and things that might break up bands but we’re so dedicated to this band. So that’s the title — we are here now and hopefully forever. We won’t give up even if something goes wrong — it’s tough to be in the music business today.”