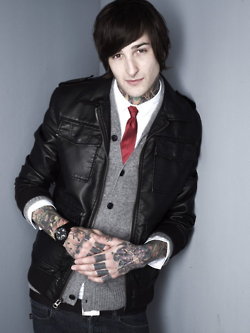 SUICIDE SILENCE frontman Mitch Lucker, who died this morning (Thursday, November 1) after sustaining injuries in a motorcycle crash, was an avid rider who made no bones about the fact that he liked to ride fast and hard.

On October 14, Lucker tweeted a photo of himself on his bike with the caption, “Captured last night smashing down the 15 freeway at 2AM. LOL.”

In an October 3 tweet, Lucker summed up his life philosophy when he wrote, “I’d rather die riding 95 than live a life full of nothing but filthy lies.”

According to The Press-Enterprise, the Orange County coroner’s office saidLucker was pronounced dead at 6:17 a.m. Thursday at UCI Medical Center in Orange County.

Lucker was hospitalized after a motorcycle accident shortly before 9 p.m. Wednesday.

The 28-year-old singer lived in Huntington Beach but grew up in Riverside, California.

SUICIDE SILENCE has released the following statement regarding the passing of the band’s lead singer, Mitch Lucker:

“There’s no easy way to say this. Mitch passed away earlier this morning from injuries sustained during a motorcycle accident. This is completely devastating to all of us and we offer our deepest condolences to his family. He will be forever in our hearts.

Nuclear Blast Records, which recently signed SUICIDE SILENCE to a multi-album deal, has released the following statement regarding the passing of the band’s lead singer, Mitch Lucker:

“It is with great sadness and regret this morning that we have to report thatMitch Lucker, vocalist of SUICIDE SILENCE, passed away a few hours ago due to injuries sustained during a motorcycle accident.

“Nuclear Blast would like to offer our condolences to his family, friends, band members and fans worldwide who are affected by this loss. He left us doing what he loved to do most.

“He was 28 years old and will be sorely missed.

“Fans are encouraged to share their memories, photos of Mitch and condolences on the band’s official Facebook page.”

At approximately 7:00 p.m. West Coast time Wednesday night, Luckertweeted a photo of himself presumably dressed up for Halloween festivities (see below) with the caption, “The dead are living…”

Lucker broke his elbow in late August and subsequently developed an infection related to the injury.