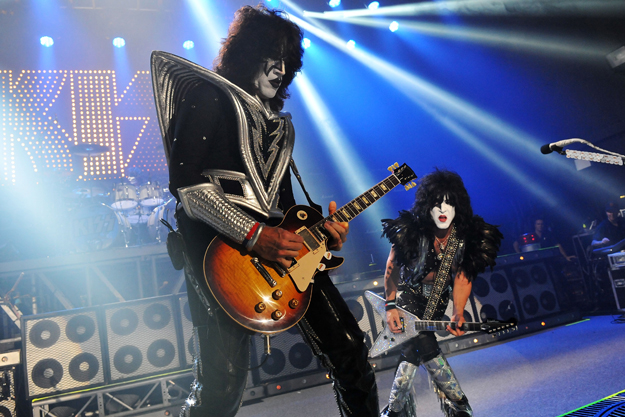 Kiss have unveiled 90-second preview clips from all thirteen songs on their upcoming album ‘Monster,’ allowing fans an early (if partial) listen to their much-anticipated 20th studio effort.

As you’d expect, and can hear from yourself on iTunes via Apple’s website, the nearly twenty minutes of music are filled with oversized guitars and sing-along choruses. The Led Zeppelin-reminiscent riff of ‘Wall of Sound’ commands immediate attention, as does Tommy Thayer’s solo on the same track.

The catchy refrain of the Gene Simmons-fronted ‘Eat Your Heart Out’ and the AC/DC-ish rhythms of Paul Stanley‘s ‘Take Me Down Below’ — which seems to be about a sexual adventure on the Kiss Kruise — are also pretty sure to peak your curiosity.

As promised, much of the record sounds like a continuation of the pumped-up ’70s hard rock of 2009′s ‘Sonic Boom.’ Other than a slight dash of acoustic guitars on ‘Freak,’ the only deviation from the meat and potatoes guitar-drums-bass instrumentation comes in the forms of handclaps and the occasional cowbell. There’s no ballads, nodisco, no keyboards, and we don’t hear anybody talking about any mythical quests either.

We’ll all get to hear the rest when ‘Monster’ drops on its recently moved-up street date of Oct. 9.