HEAR METALLICA’S COVER OF “WHEN A BLIND MAN CRIES,” FROM RE-MACHINED – A TRIBUTE TO DEEP PURPLE’S MACHINE HEAD. 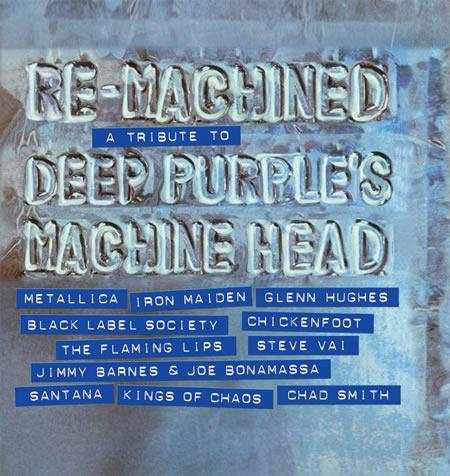 Eagle Records has announced the release of “Re-Machined – A Tribute To Deep Purple’s Machine Head” album on September 25.

This year marks the 40th anniversary of the release of this landmark album and in recognition of the influence of the band, and of “Machine Head” in particular. Some of rock music’s biggest names have each contributed a version of their favorite track on the album to create “Re-Machined – A Tribute To Deep Purple’s Machine Head”.

There are two wildly differing versions of the album’s most famous track “Smoke On The Water”, one from guitar hero Carlos Santana with vocals by Jacoby Shaddix and one from alternative rockers FLAMING LIPS, and METALLICA have contributed their own special take on “When A Blind Man Cries”, a track recorded at the “Machine Head” sessions but originally released as the B-side to “Never Before”.
IRON MAIDEN‘s “Space Truckin'” cover was actually recorded back in 2006. Lead singer Bruce Dickinson explains, “Initially we didn’t think we’d be able to contribute anything due to our touring commitments. Then we remembered ‘Space Truckin” which we’d recorded as a single B-side during our ‘A Matter Of Life And Death’ album session, but never used. However now, thanks to Kevin Shirley‘s remixing skills, we’re able to include it on ‘Re-Machined’.”

Drummer Lars Ulrich of METALLICA, who are also recording a song for the upcoming Ronnie James Dio tribute album, previously said, “We were asked if we’d contribute to the anniversary of ‘Machine Head’ — we can’t turn that down. We’re circling the Dio and PURPLE catalogs and hopefully we’ll come up with something that is worthy of these wonderful men.”

Initially released as a limited edition Classic Rock “fanpack” on September 3, this is a truly unique release that will appeal to rock fans everywhere.

01. Smoke On The Water – CARLOS SANTANA

06. Smoke On The Water – THE FLAMING LIPS

09. When A Blind Man Cries – METALLICA

METALLICA‘s cover of “When A Blind Man Cries”: