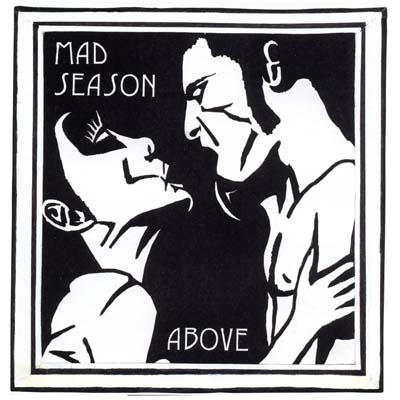 The Pulse Of Radio reports that PEARL JAM guitarist Mike McCready has found a singer to record the vocals for roughly an album’s worth of unfinished songs by MAD SEASON, the mid-’90s Seattle supergroup featuring McCready, ALICE IN CHAINS frontman Layne Staley and SCREAMING TREES drummer Barrett Martin. According to Guerilla Candy, that vocalist is Mark Lanegan, who was the singer for the TREES and has also spent time with QUEENS OF THE STONE AGE. It is not clear whether Lanegan will record vocals for all the songs or if McCready will bring in other guest vocalists as well.

Martin himself broke the news. Lanegan co-wrote two songs on MAD SEASON‘s only album, “Above”, and contributed vocals to a track called “Long Gone Day”.

McCready said a few months back that MAD SEASON could be making a semi-return later this year. He plans to reissue “Above”, and also revealed the existence of the unreleased material, which was demoed but never completed.
MAD SEASON‘s sole album, “Above”, was certified gold for sales of half a million copies and yielded two Top 20 modern rock singles, “River Of Deceit” and “I Don’t Know Anything”.