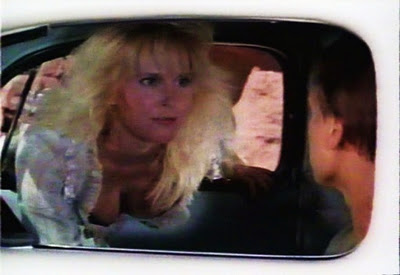 Remember Lita Ford? You should. The veteran rocker made waves alongside fellow legendary badasses Cherie Currie (see FANGO #299) and Joan Jett playing lead guitar in the breakout “jailbait” 70s rock band The Runaways, and later found even greater fame in the 1980s as a solo artist and one of the reigning queens of pop heavy metal.

The talented shredder was beloved for her big hair, sexy curves, smoldering, giant rock voice (she’s a mezzo–soprano) and anthemic hard tunes, even topping charts with the classic glam metal ballad “If I Close My Eyes Forever,”a duet with the legendary Ozzy Osbourne.

Lita never went away, but she’s figuratively “back” with a blistering new dark record called LIVING LIKE A RUNAWAY (SPV/Steamhammer), a none too subtle nod to the pop culture weight her name carries, as well as the personal issues she’s had that make their way into the fabric of every track.

We spoke with Lita, not just to riff on the new riffs, but to drag forth a little horror movie quasi-classic she appeared in 20 years ago, director Ate de Jong’s demented cult item HIGHWAY TO HELL. Remember that one? Lita does….

FANGORIA: What I love about LIVING LIKE A RUNAWAY is that it’s doing something most artists never attempt anymore. It’s a concept album, a kind of pop metal rock opera. Why did you opt to do this?

LITA FORD: It’s just something I’ve always wanted to do. My biggest loves are albums like WELCOME TO MY NIGHTMARE, concepts that have running themes and strong identities. There’s no filler here in this album, no hit song, it all fits together like a puzzle in its entirety. The songs almost run into each other; if we had more time they would have literally run in to each other, but the record company wanted it and we had to turn it in quickly.

FANG: The album has a really tough, dark shiny, sound; almost proto-industrial. What was it like working with producer Gary Hoey?

FORD: Gary is brilliant. He really did what a producer is supposed to do, as opposed to what some producers do and that’s just sit there and press record. He focused on bringing best out of the artist – me. He brought out my vocals out like they’ve never been heard before. The arrangements of the songs were time consuming. We’d write a song, then leave it, live with it for three weeks, go back and make final tweaks, plug in and move guitar solos. Conceptually, everything was focused right down to the artwork. It became a real journey of emotions.

FANG: This is a very emotional work—I really dig “A Song to Slit your Wrists by”—but even when you were at your darkest with your own problems, do you remind yourself that you are Lita Ford and does your legacy give you strength?

FORD: Absolutely it does. You gotta live up to your legacy. It’s a lot. With the tour coming up, it’s a lot to put together. I never want to let anyone down. People look to you for strength and I think people will look to the music at certain point in their life to get them through. Music holds memories. It’s the soundtrack of your life. People go through horrific times and they turn to songs, and it gets them through. When my heart hurts, I put on my favorite song. It makes me feel better. It’s a heavy burden, but I welcome it.

FANG: We at FANGORIA still recall you turning up in HIGHWAY TO HELL. Do you ever revisit that weird little picture?

FORD: I have revisited it often and not too long ago. I remember making it clearly. I remember sticking my head in that window of that car and saying “Sex, drugs and rock and roll!”. I loved what I was wearing, that frilly dress; I don’t normally dress like that but loved it in that movie.

FANG: Do your fans ever bring it up?

FORD: All the time. Fans always bring me copies of the film on video to sign. I love it. I actually don’t have a copy myself, though.

FANG: What? You should! You should have that proudly placed on your mantle.

FANG: Does the movie muse ever call to you?

FORD: It’s on my to-do list. After the tour, we might do a reality show. We’ll see how this year goes!

To find out more about LIVING LIKE A RUNAWAY and Lita’s legacy (and to see a great pic of the still smoking songstress poured into black spandex), head to her official site.

And for the record, here’s Lita accosting Chad Lowe in HIGHWAY TO HELL