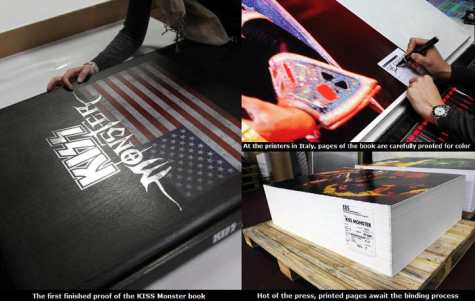 According to a posting on KISS‘ official web site, KissOnline.com, the members of KISS got an up-close-and-personal look at a “finished proof” of the massive KISS “Monster” book last week and were quite impressed. Bassist/vocalist Gene Simmons was quoted as saying, “It’s fantastic!” After vocalist/guitarist Paul Stanley had his first look, he said, “This book is way beyond my expectations. The photos are incredible at this size. It’s not a coffee table book, it’s a coffee table!”
The KISS “Monster” book is a retrospective featuring all the different eras of KISS in makeup, starting in the early years and continuing on to present day. “We selected photos that captured the absolute essence of being in and around a KISS concert,” says guitarist Tommy Thayer.
“Ten different editions will be dedicated personally to the KISS Army of the biggest countries we’ve toured throughout the world,” Tommy continues. “Each edition will feature a different cover featuring the flag of that nation and inside each book there will be a personally signed, dated and numbered dedication page from the band.”
The book is presently being custom printed in Italy at EBS Editoriale Bortolazzi Stei, one of the finest book manufacturers in the world. Each individual copy will be handmade with no machines involved in the finishing and binding of the book. Each book will have a character and feel of its own, at the same time retaining explicit high production standards.
KISS will officially unveil the “Monster” book in July.
KISS has completed recording its new album, “Monster”, for a fall release. Songtitles set to appear on the CD include “It’s A Long Way Down”, “Back To The Stone Age”, “Shout Mercy”, “Out Of This World”, “Wall Of Sound” and “Hell Or Hallelujah”.
“I wasn’t interested in making an album unless I was in charge and no one agreed to it half-heartedly,” KISS guitarist/vocalist Paul Stanley told Classic Rock magazine. “The band’s all there, all the time, and we cut the tracks all facing each other in the same room. Chemistry and camaraderie, that’s essential. That’s what made [2009’s] ‘Sonic Boom’ so great, and this album is thunderously better.”