STONE TEMPLE PILOTS singer Scott Weiland has revealed to ABC News Radio that he has reunited with VELVET REVOLVER and is back making new music with the band. “We’ve all grown a lot,” explains Weiland. “We’re able to put egos and differences and old… conflicts aside and so that’s really cool.”

He added, “They gave me a couple of [new] songs and myself and [guitarist] Dave [Kushner] and [bassist] Duff [McKagan] are gonna be getting together for a songwriting session next week.”

According to Weiland, VELVET REVOLVER will hit the road for a short tour before the end of the year. “[VELVET REVOLVER guitarist] Slash‘s solo album gets released [on May 22] and so he’s gonna do some touring on that and then we’re gonna go and do some [VELVET REVOLVER] shows in the later part of summer into early fall,” the singer said.

During an appearance on this morning’s (Monday, May 14) edition of the “Half-Assed Morning Show” on the Minneapolis, Minnesota radio station 93X, Slash shot down Weiland‘s reunion comments, explaining, “I have absolutely no intention of going back to that. . . I’m on tour all year. I’ll call Duff, but I seriously doubt [there is any truth to Weiland‘s comments]. We have no intention of going backwards.”

VELVET REVOLVER reunited with Scott Weiland for a performance at the January “Love You Madly: A Concert For John O’Brien” at the House Of Blues in West Hollywood, California. The band played a four-song set — including a cover version of the PINK FLOYD classic “Wish You Were Here” — at the event, which paid tribute to award-winning ASCAP composer John O’Brien, who was found dead in his Chicago hotel room last August.

When asked by RollingStone.com whether he would be open to a full-fledged VELVET REVOLVER reunion at some point down the road, Weiland said, “Yeah, I definitely would, some time. If Maynard [James Keenan] can do it with A PERFECT CIRCLE and TOOL, then there’s no reason why I shouldn’t go and do it with both bands [STONE TEMPLE PILOTS and VELVET REVOLVER].”

Speaking to Frankie DiVita, radio personality for 96.7 KCAL Rocks, at the 2012 NAMM (National Association Of Music Merchants) show, VELVET REVOLVER drummer Matt Sorum stated about the experience of playing with Weiland again, “It was cool, man. We hadn’t played together in a long time. We soundchecked a few songs. We only played, like, three songs. But it was cool to be on stage and play music again. It was like riding a bike. Everyone had a good time and we raised some money for a really sad situation. John O’Brien passed away and left a pregnant wife and another child. And a lot of people turned out for the show… Amazing turnout.”

He added, “We had a good time. Me and Scott worked out some stuff backstage and had talked, and that was nice. He came up to me and he was real humble and really cool. ‘Cause stuff happens when you’re out on the road and people are tired and you say shit. Everything is on the Internet now; you can’t get away with anything.

“Being in the music business for as long as I have been, I’m still learning lessons. We were out on the road for 18 months. And we got tired and things happened. There’s a lot of pressure. You think you’d always wanna do it differently, but stuff goes the way it’s gonna go; I can’t explain it.

“We made some good records [with Scott]. The second record [2007’s ‘Libertad’] didn’t get as much action as the first one [2004’s ‘Contraband’], but I think it’s a cool record, too. I liked a lot of that record, and working with [producer] Brendan O’Brien. The first record, obviously, was a huge success for us.”

When asked about whether there is any chance of VELVET REVOLVER working with Weiland again, Sorum said, “I don’t know… We’ll see what happens. [VELVET REVOLVER guitarist] Slash is booked up for about another year [touring in support of his upcoming solo album], so I don’t know what’s gonna go on with anything, to be honest. We haven’t discussed it. . . I don’t know… I can’t say. It hasn’t really been discussed, so I don’t wanna speak out of turn.”

On the topic of why it’s been so hard for VELVET REVOLVER to find a replacement for Weiland, Sorum said, “We were trying [to find a new singer last year], but it didn’t work out that way. . . We had Corey Taylor [from SLIPKNOT and STONE SOUR coming in and writing songs with us]; it’s kind of well known. We did some songs, and it just didn’t turn everybody on completely. So we, basically, put the brakes on that. I think I was a little bit excited to get going, but maybe that was more excitement than… I thought it was cool, but Slash wasn’t into it. And if we’re not all firing on the same cylinders, we don’t usually… We respect that, you know.”

VELVET REVOLVER‘s setlist for the January 12 performance with Scott Weiland at the “Love You Madly: A Concert For John O’Brien” event was as follows:

Weiland reunited with his original band, STONE TEMPLE PILOTS, just as his run with VELVET REVOLVER was coming to a close. STP has toured constantly since and recorded a new album in 2010. 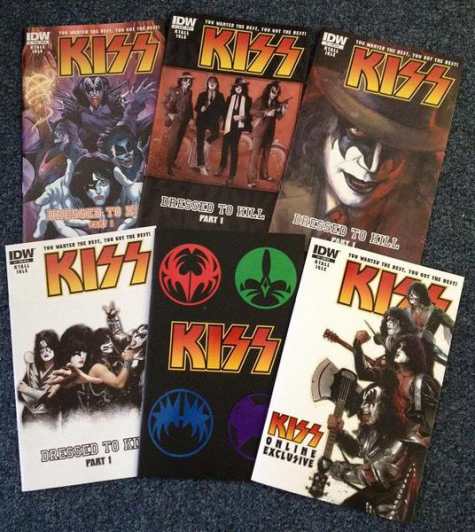 On June 13, IDW Publishing is bringing back the rock group KISS in comic form. Last year, Archie Comics released a story in which Archie met KISS. This time IDW is giving them marquee status.

According to IDW, the series is rooted in KISS fandom, featuring KISS characters like “Wicked” Lester, the Destroyer, She, the Elder, and more, but it will be very accessible to all comic readers.

KISS will be written by Chris Ryall (Zombies vs Robots) with art by Jamal Igle (The Ray) and KISS #1-4 come with a special “solo album” covers by artist Michael Gaydos.

Variant covers will also be available, including a Michael Gaydos “Demon” cover and a KISS photo cover.

A photo of the advance copies of the new KISS comic issue #1 can be seen below. Pictured are the six different covers that will be available for the first issue.

Bottom row: limited cover available at select retailers; the black cover is exclusive to one retailer only; last one on right is the KissOnline.com exclusive.

KISS has been the subject of several comic book series with several different publishers. Why did IDW pick the group to work with?

Chris Ryall: “It pretty much follows the way we choose to pursue any license: we’re fans of the material. Both Tom Waltz and I are lifelong KISS fans; and add to that the fact that we produced a line of Simmons Comic Group releases with Gene Simmons a few years back and it’s just been something we’ve always wanted to do. Some of my earliest comic-reading moments are of enjoying the KISS Super Specials that Marvel produced in the ’70s, and it’s a personal thrill to not only be able to carry on with KISS comics but to now write them myself, too.”

Tom Waltz: “As Chris states, we tend not to pursue any license at IDW that won’t have an editor behind it who is a fan and willing to champion it through the long process of getting it approved and into print. In the case of KISS, Chris and I are not only champions of the license, we’re uber-fans of the band and their music, not to mention the KISS comics from various other publishers in the past. Like Chris, I ate up those Marvel KISS comics and to now be able to be a part of the ongoing adventures of our hard-rockin’, kabuki-wearin’ heroes is a real highlight of my career as a writer/editor.”