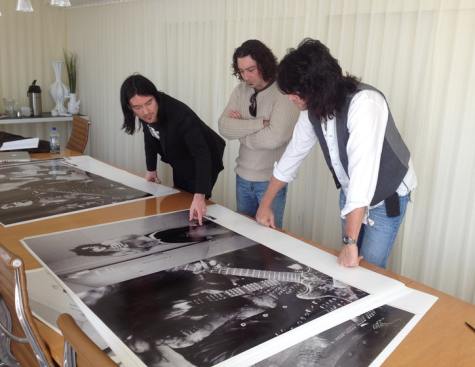 According to a posting on KISS‘ official web site, KissOnline.com, KISS will release a “Kiss Monster” book this summer. The band’s guitarist, Tommy Thayer, met with the team from the U.K.’s First Light Publishers yesterday (Monday, March 19) to review full-size proofs from the giant book. More information will be made available soon.

KISS has completed recording its new album, “Monster”, for a summer release. Songtitles set to appear on the CD include “It’s A Long Way Down”, “Back To The Stone Age”, “Shout Mercy”, “Out Of This World”, “Wall Of Sound” and “Hell Or Hallelujah”.

“I wasn’t interested in making an album unless I was in charge and no one agreed to it half-heartedly,” KISS guitarist/vocalist Paul Stanley told Classic Rock magazine. “The band’s all there, all the time, and we cut the tracks all facing each other in the same room. Chemistry and camaraderie, that’s essential. That’s what made [2009’s] ‘Sonic Boom’ so great, and this album is thunderously better.”

’80s hard rock queen Lita Ford will release her new album, “Living Like A Runaway”, on June 19 in North America via SPV/Steamhammer. The effort will be available in four configurations: double LP, limited-edition CD, standard CD and digital download.

Commented Lita: “This CD is truly a dream come true. It took me one year to write this CD along with producer Gary Hoey and songwriting partner Michael Dan Ehming. We have dumped out hearts and souls into this amazing CD. Along with a lot of tears, pain, heartache, laughter, ripping out hair, going hungry, losing sleep and a lot of frequent-flyer miles. ‘Living Like a Runaway’ is like being able to walk through fire and coming out the other side unscathed.”

Coinciding with the album’s release, Lita will hit the road this summer with DEF LEPPARD and POISON on the “Rock Of Ages Tour”.

Lita is looking forward to the tour and getting to play the new songs live.

“We are honored with this awesome tour and being able to play with these brilliant musicians,” she says. “So strap in tight, it’s going to be one powerful journey.”

Best known for her work with THE RUNAWAYS and her solo career, including hit singles “Kiss Me Deadly” and the Billboard-charting duet with Ozzy Osbourne, “Close My Eyes Forever”, Lita is ready to make a return to the throne as the queen of metal.

“Living Like A Runaway” was co-written and produced by Gary Hoey and represents a return to form for Lita, who drew inspiration from her “ugly divorce” from NITRO singer Jim Gillette.

“Gary Hoey and I wanted to approach this record by getting back to basics,” she said. “We want to strip away all the electronics and plug-ins and keep it to vocals, guitar, bass, and drums. Going back to basics is going back to what punk, metal and THE RUNAWAYS was for me.”

She added, “[The album title] ‘Living Like A Runaway’ means freedom and empowerment. To do what I want and to pursue my dreams while answering to no one.”

In a 2011 interview with Classic Rock Revisited, Lita said that “Living Like A Runaway” will be her “real comeback album.” She explained, “The last album I did was called ‘Wicked Wonderland’, I put it out with Jim Gillette, and we were married at the time. It is kind of a Jim/Lita album and not a really true Lita album. I got a lot of spiel about that. A lot of people have told me that they want a real Lita album, and I know what they mean. They are going to get it.”

She continued, “I really wasn’t that comfortable with ‘Wicked Wonderland’ — not at all, to tell you the truth. There are parts of it that are good but it doesn’t sound like a Lita record. When it got released, a lot of my fans felt weird about it and said it wasn’t a Lita album. This time I want to do it on my own. The last one turned out to be more of a Jim album. We worked pretty well together. It doesn’t suck, it’s not a bad album; it’s just not a Lita album.”

Lita and Jim are the parents of two sons, Rocco and James.

“Stalingrad” will be released on April 6 via Nuclear Blast Records. The CD was once again helmed by British producer Andy Sneap (MEGADETH, EXODUS, NEVERMORE, ARCH ENEMY), who worked on the band’s critically acclaimed comeback effort, “Blood Of The Nations”.

“Stalingrad”will be made available in the following formats:

Commented ACCEPT guitarist Wolf Hoffman: “ACCEPT and Andy Sneap have the perfect synergy. This was so clear with ‘Blood Of The Nations’ and we are excited to continue on that path. Andy is not only an amazing and prolific producer but also a very good friend who has long become a member of the ACCEPT family.”

Regarding the musical direction of ACCEPT‘s next album, Hoffmann told The Rock Pit last year, “We’re just gonna have the same attitude, the approach; we’re just gonna do more of the same, you know, without it being the same. More similar-style stuff, hopefully fresh new ideas. And I mean, we’re not gonna… The intention is not to change it right now. I mean, why would we? . . . But I have to say, it’s always easier said than done. It’s incredibly difficult to write songs that are sort of reminiscent of the past but they’re not, you know, rip-offs of your own music. That sounds incredibly very simple, but it’s really not, especially if you have a sort of history of 15 albums or whatever we have. Then there are always similarities that you have to avoid. It can’t be too close, but it can’t be too far away from it. So it’s a pretty fine line that you have to walk sometimes, but, you know, hopefully we’ll manage again.”

ACCEPT‘s July 15, 2011 performance at last year’s edition of the Bang Your Head!!! festival in Balingen, Germany marked the band’s return to a five-piece format after the group spent a couple of months touring as a quartet due to the fact that guitarist Herman Frank suffered broken ribs and a punctured lung in a stage fall on May 6, 2011 in San Antonio.

“Blood Of The Nations” was released in North America on September 14, 2010 via Nuclear Blast Records. Recorded at Sneap‘s Backstage Studio in Derbyshire, England, the CD marked the debut of the band’s latest addition, vocalist Mark Tornillo (ex-TT QUICK).