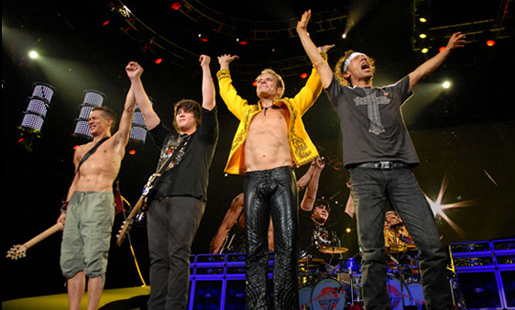 According to The Pulse Of Radio, the first review of VAN HALEN‘s new album, “A Different Kind Of Truth”, has been posted online at Antiquiet — and it’s overwhelmingly positive. Critic Johnny Firecloud says that the band’s first album with original singer David Lee Roth in 28 years is a “true return” and “screaming triumph,” adding, “That old familiar feeling has returned, the unique flare of excitement that comes from a muscle car rhythm section led by a six-string wizard and a singing sexual megalodon with an ego that made Kanye look like a kid flaunting his new Spider-Man underoos — and the pipes to back up the strut.”

The review acknowledges that much of the album is made up of material pulled from the band’s archives, writing, “Thankfully, these songs do not sound like old men putting on the smelly old spandex and combing over the strays. Fresh is the operative word here, a supremely confident swing for the fences in an understandable progression from the obsessively romanticized pre-Hagar era.”
First single and album opener “Tattoo” is described as the “low point for an otherwise fantastic album,” which may offer hope to fans who have voiced displeasure with that track. Other songs cited as standout tracks include “She’s The Woman”, “You And Your Blues”, “China Town” and “Stay Frosty”.
The review concludes, “‘A Different Kind Of Truth’ will be remembered as evidence that a band can endure every cliche in the book and return, with the right focus, obsessed dedication and mojo, to a sweet spot of rejuvenation — one that holds the hand of nostalgia but doesn’t go for the full embrace, leaning instead, wisely, toward evolution.”
“A Different Kind Of Truth” arrives next Tuesday (February 7), with the band kicking off a North American tour on February 18 in Louisville, Kentucky.