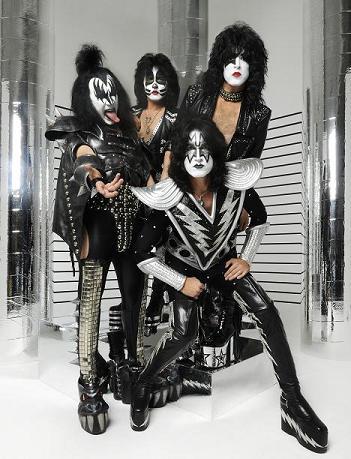 “Friday [January 6] we officially completed work on the new album.

“Listening to the tracks back to back is like sensory overload. Everyone who has heard any of it is completely blown away. Powerful, heavy, melodic and epic.

“It makes us very proud. You all will be, too.

The February 2012 issue of U.K.’s Classic Rock magazine features Stanley‘s thoughts on six songs from “Monster”, which he is co-producing.

“I wasn’t interested in making an album unless I was in charge and no one agreed to it half-heartedly,” says Stanley. “The band’s all there, all the time, and we cut the tracks all facing each other in the same room. Chemistry and camaraderie, that’s essential. That’s what made [2009’s] ‘Sonic Boom’ so great, and this album is thunderously better.”

Stanley: “It says that those who reach heights and don’t appreciate them fall mightily — it’s a long way down from the top. It’s a defining track in the sense that it’s very up-tempo and very much a signature song. Eric‘s [Singer] drumming is incredible on this.”

“Back To The Stone Age”

Stanley: “One that Gene [Simmons] sings. It’s exactly what you’d expect it to be from the title. I come from a school where you write a verse, a bridge, a chorus, and then you go back. That’s in my blood. It’s in Motown, it’s in THE BEATLES, it’s in LED ZEPPELIN, it’s in THE WHO, its in all my favorite bands.”

Stanley: “That’s a great track. There’s a lot of tracks that could start the album, and this is one of them. I like to think that the opening song is a declaration of what the album really is, whether it’s a ‘Love Gun’ or a ‘Detroit Rock City’. It’s important to start with a song that defines what you’re gonna be getting.”

“Out Of This World”

Stanley: “That’s one of Tommy‘s [Thayer, guitarist.] He really pushed the limits. His playing is phenomenal. It has the kind of excitement that I like to hear where you’re not quite sure if it’s gonna go off the rails or not. That’s what makes great rock n’ roll.”
“Wall Of Sound”

Stanley: “We’re not trying to reinvent the wheel here; we’re at our best when we don’t over-think. It’s not a Rubik’s Cube, it’s a song, you know? This one is absolutely, immediately recognisable and identifiable and true to being KISS. I put the blinders on us to keep us from being derailed or the attention span broken by things going on around us.”

Stanley: “Another up-tempo song, and it’s very definitive. That’s what I think is so great about this album: every track is quintessential. No one does it better — and many have tried. When we hit the bulls-eye, we hit it full on. We’ve cut 14 tracks. How many we’ll use or how this will play out will be interesting, but there’s no filler.”

There’s been no release date announced for “Monster”.

Stanley admits that he’s never surprised by how deep KISS‘ fan devotion continues to run worldwide. “It really for me, resoundingly once again, I guess validates for me why this band exists,” he told The Pulse Of Radio. “It’s not a tepid recreation of the past, it’s really an ageless beast that dominates at will. It’s timeless.”

Gene Simmons told The Pulse Of Radio that despite the knocks KISS has received from the rock press over the years, that sometimes in rock n’ roll, style actually makes for excellent substance. “Y’know, every few years there’s a kind of born-again thing that happens with KISS, a kick in the butt,” he said. “And despite the naysayers and whoever else we have long since buried in our backyards of mansions that bad reviews built us — we all live and die by the masses. So interestingly enough, the movies that I go see, that I love, when I read the reviews, I’m shocked because I always get the sense, ‘Oh, they must have seen a different movie.’ So when I go see ‘G.I. Joe’, or ‘Transformers’, or some of the other great thrill-rides; This ain’t Shakespeare! (Laughs) But it also doesn’t pretend to be. That’s not why I’m going. I wanna see the world blow up.”