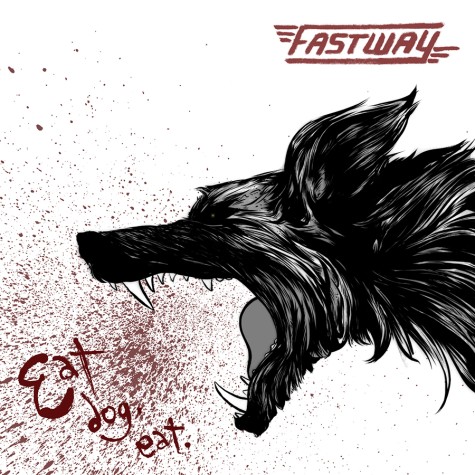 “Leave The Light On”, a brand new song from FASTWAY — the brainchild of ex-MOTÖRHEAD guitarist Fast Eddie Clarke — is
available for streaming using the SoundCloud player below. The track comes off the band’s first studio album since 1990, “Eat Dog Eat”, which will be released on November 14 (three days earlier in Germany) via Steamhammer/SPV. The CD, which features new vocalist Toby
Jepson (ex-LITTLE ANGELS), is described by Clarke as “by far the best thing I have done since the first FASTWAY album. This is classic
rock at its best!”

Commented Olly Hahn, A&R representative at Steamhammer: “It`s an honor to have Fast Eddie Clarke and his band on our label. He was THE guitar player in MOTÖRHEAD but also with FASTWAY he delivered awesome music. With ‘Eat Dog Eat’ he’s definitely back… probably better than ever!”

Formed in 1983, FASTWAY‘s self-titled debut album entered the U.K. charts at No. 43 and received very good reviews. One year later, “All Fired Up” was released and was a great success, thanks in no small part to high-profile support tours in the U.S. with SCORPIONS and RUSH. In 1985 “Waiting For The Roar” saw the light of day and was followed by dates with AC/DC on the “Fly On The Wall” tour. In 1986 FASTWAY wrote the soundtrack to the horror movie “Trick Or Treat” starring Ozzy Osbourne and Gene Simmons.