25TH ANNIVERSARY OF CLIFF BURTON’S DEATH(LARS REMEMBERS) SO DO I. 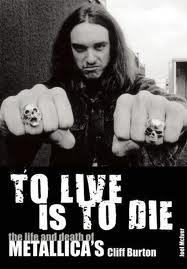 Today marks the 25th anniversary of METALLICA bassist Cliff Burton‘s death. In remembrance of him, the band’s drummer Lars Ulrich gave a personal and emotional account of him in Revolver magazine’s January/February “Fallen Heroes” issue. He had so many great stories about Burton, Revolver couldn’t fit them in the magazine. So, in reverence, here is more of what Ulrich had to say about Burton.

Revolver: What do you remember about the first time you saw him?

Lars: I had just never really seen anything quite like it. It was just unique and so original. And there was just this incredible stage presence and this uniqueness to the whole vibe. I had just never seen anything like it. It was new, it was different. And obviously you could tell there was an
incredible ability, and there was a stage presence, and all this type of stuff wrapped up in this incredible type of personality. And I think we were a little intimidated by him in the beginning because he was just so unique. But then as we got to know him a little bit, and I sort of started courting him to try and jump ship [from his band TRAUMA], then I started realizing he was a pretty chill dude. But he was also pretty firm on the fact that L.A. was not for him. ‘Cause me and James [Hetfield] were trying to get him to come down to L.A., and he just wasn’t into that. He was really rooted up here [near San Francisco], he really was a kind of a Northern California… almost a hillbilly like. I mean, there’s a lot of different vibes up here, and there’s definitely a kind of unique vibe in Castro Valley and Hayward and stuff. And he was a real, really rooted where it came from. And he was probably, certainly speaking for myself, I was much more of a gypsy. When we traveled and stuff like that, he was the first guy to want to go home. And he was the one who was probably at the strongest of roots of all of us. He had family and kind of a history. Me and James were more loners.

Lars: He didn’t hurt people. He didn’t cross the line, but he was certainly always up for being part of stirring some shit up. But more like a rascal point of view then someone who was out to hurt people. So it was more fun and games. He would fake fight or whatever, throw some kind of fake
punches, but he would never throw any real punches. I don’t think I ever saw Cliff in a fight. I don’t think I ever saw Cliff get into heated exchanges or anything. I mean, he was a pretty chill guy. And it never got nasty or unpleasant.

Revolver: What are your fondest memories of him?

Lars: My fondest memories of Cliff are his total disregard for convention and his total disregard for playing things out the way you expected them. He was up to challenge the normalcy, to challenge the status quo, to just fuck with things musically, attitude-wise — the way he dressed, the way he carried himself, his sense of humor, his relationship with the music that inspired him, the music that he played. It was always very unconventional, and it was very unusual. You could certainly argue that me and James at that time were more kind of the squarer guys, ’cause we were more like, “MOTÖRHEAD, IRON MAIDEN!” Heavy metal T-shirts, and long hair and bang our heads into the wall. Cliff was just so fast in his palette of things that he was into and things that were inspiring him and the things that he was doing. So it was definitely his music, and his attitude, and his approach towards life that really inspired me and James to broaden our horizons, broaden METALLICA‘s horizons musically. So when I think of Cliff, that’s what I think…that’s just kind of variety and unpredictability, you know.

Revolver: What do you think of him when you look back at it all now?

Lars: He was really cool. It was, obviously other than losing a brother, it would’ve been the more… I would’ve been interested to see what else he could’ve contributed, because it felt like we were just getting started. We just started playing “Orion” again on the last run, in the last two weeks [when METALLICA were preparing for the “Big Four” concert in April]. So playing “Orion”, I think we played it like three times in the last two weeks. You sit there and all of a sudden go, Fuck! What a, just, incredible piece of music. And just so unique. And it would’ve been interesting to see what else would’ve been in that vast well of stuff that he could’ve shared with the rest of us. That will forever be the curiosity element. But I’m so glad that I got a chance to play with him for a couple, three years. And got a chance to know him, and got a chance to drink with him, and all the shenanigans that probably shouldn’t be printed in a nice, family publication like Revolver. But it definitely was a pretty nutty time, and at the time we certainly embraced what life was offering us. And accelerated it to a “mach 10,” as James used to say on stage.

One of the greatest bass players who ever took the stage, Mr. Clifford Lee Burton.

One viewing of the video of Anesthesia -Pulling Teeth and you’ll begin to understand.

Clifford Lee Burton was born February 10, 1962 in Castro Valley, CA. He discovered music as a youngster, immersing himself in blues, classical, country, jazz and one of his favorites, Mozart. When Cliff was six years old he learned to play the piano, picking up the bass guitar as a teenager and taking bass lessons from 1978 thru 1980. In college, he studied musical theory and his knowledge of musical theory became a huge influence on the first three Metallica albums.

In 1982 Cliff traveled to Los Angeles with his first major band, Trauma, to play at the Whiskey A-Go-Go. In attendance that night were James Hetfield and Lars Ulrich. After witnessing what James Hetfield described ad “this amazing shredding,” he and Lars went looking for the amazing guitar player for their band only to learn later that they had in fact heard Cliff’s bass.

Cliff agreed to  join Metallica when at Cliff’s insistence, Metallica agreed to move their base of operation to San Francisco.

His first recording with the band was a demo for Megaforce Records. Soon followed by the first of three metal masterpieces, Kill ‘Em All, Ride the Lightning, and Master of Puppets.

The tragic death of Cliff Burton is still one of the saddest moments in music history, not just heavy metal music history.

During the European leg of the Damage Inc. tour in support of  Master of Puppets, the band complained that the sleeping cubicles on their tour bus were unsatisfactory and uncomfortable. To decide who was getting the pick of the bunks, Kirk Hammett and Burton drew cards. On the evening of September 26, 1986, Burton had won the game with an Ace of Spades, earning dibs. Cliff pointed at Hammett and exclaimed “I want your bunk!” To which Hammett replied “Fine, take my bunk, its probably better anyway”. He was asleep when at several minutes before 7 am (on the 27th), according to the driver, the bus ran over a patch of black ice, skidded off of the road (the E4, 2 miles north of Llungby), and flipped onto the grass in Llungby Municipality, near Dorarp in rural southern Sweden. Burton was thrown through the window of the bus, which fell on top of him, crushing him to death.

In honor of the immense talent and enduring influence of the late, great Cliff Burton I’ve included Anesthesia -Pulling Teeth and a few other Cliff Burton gems for your enjoyment.