Get ready for the rock wedding of the year.

After 28 years together, KISS bassist Gene Simmons and Shannon Tweed are getting married.

The two left viewers hanging on the season finale of their A&E reality show, “Gene Simmons: Family Jewels,” when footage showed Simmons popping the question while vacationing in Belize. The show teased that Tweed’s response will be revealed when the show returns Oct. 4.

But People.com has obtained an invitation to the wedding, which is set for October 1 (three days before the new season of  “Jewels” premieres) at
the Beverly Hills Hotel.

It sounds like it will be an affair to remember.

The invite comes it two parts:

The first part reveals the big-day details, requesting that “classy cocktail attire” be worn (even though the invite states, “We know some Rockstar attire
will be worn”).

The second part is a sweet message from the couple’s children, Nick, 22, and Sophie, 19. It pokes fun at their parents’ past feuding. It reads, “After 28
years of two loose strings, our parents have finally decided to tie the knot.” It goes on to say, “There will be no more Team Tweed or a Team Simmons but instead a Team Tweed-Simmons, and as annoyingly long as that is, We hope you’re on it.”

Simmons, 62, plays bass guitar in the band KISS (hits include “Detroit Rock City” and “Rock and Roll All Night”). Tweed has appeared in “Playboy” in the 1980s and has had starring roles in low-budget flicks like “Cannibal Women in the Avocado Jungle of Death” and “Scorned.”

Marilyn Manson has set “Born Villain” as the title of his eighth studio album, tentatively due before the end of the year through Cooking
Vinyl Records.

The singer yesterday unveiled a new music video for the song “Born Villain” directed by actor Shia LaBeouf. The shock-rocker and the “Transformers” star met at a KILLS concert, when LaBeouf, a longtime Manson fan, struck up a conversation.
LaBeouf said, “He’s a big deal to me, and in my childhood, I don’t know of a scarier figure in art. He, in my teenage years, was the scariest thing in
the world, so part of me has always been intrigued.” LaBeouf offered to direct Manson’s next video and the singer agreed after LaBeouf showed him
a clip he had directed for a band called CAGE. LaBeouf said that Manson is “like a brother to me now. He’s a real sweet dude, a real close friend.”

Marilyn Manson has also posted the following message about both the album and the film on his official web site, MarilynManson.com:

“‘Born Villain’ is the title of the new MARILYN MANSON album. While looking to experiment in unlikely collaborations, I met Shia, and we spent a long night at my studio. After seeing ‘Maniac’, his short film, which is somewhat inspired by ‘Man Bites Dog’, I was astonished by his directing ability. So I shared quite a few of my favorite inspirations in art, literature, and obviously film. I was impressed with how Shia digested my world, and made what I’d like to think, is both an homage and a mockery of the history of cinema. We ended up writing a short film. The score is from my new album, and is, in the words of Macbeth, ‘Full of sound and fury.'” 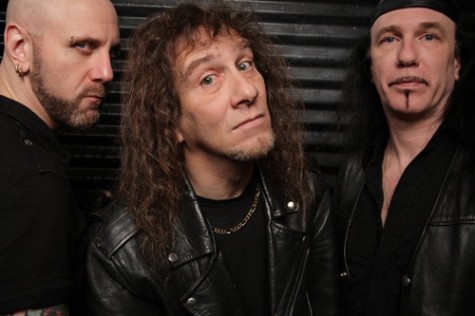 The End Records will celebrate ANVIL‘s career with “Monument Of Metal: The Very Best Of Anvil”, a 19-track career retrospective that will earn “must-own” and “must-hear” status for fans both fans new and old.

Due on September 27, this set collects choice cuts from ANVIL‘s career and the track listing was hand-selected by the members of ANVIL and spans their three-decade career. It is designed to show you why the aforementioned likes of GUNS ‘N ROSES, METALLICA, MOTÖRHEAD, ANTHRAX, SLAYER and more have praised ANVIL as pioneers and way pavers in the heavy metal world. It’s a retrospective spanning the band’s entire iconic career and a comprehensive heavy metal history lesson captured on record.

ANVIL‘s latest album, “Juggernaut Of Justice” was released in Europe on June 20 (three days earlier in Germany) via PV/Steamhammer. The effort was made available as a limited-edition digipak (including two bonus tracks), double gatefold LP in blue vinyl, standard version and a digital download.

“Juggernaut Of Justice” sold around 1,600 copies in the United States in its first week of release. The CD landed at position No. 12 on the Top New Artist Albums (Heatseekers) chart, which lists the best-selling albums by new and developing artists, defined as those who have never appeared in the Top 100 of The Billboard 200.