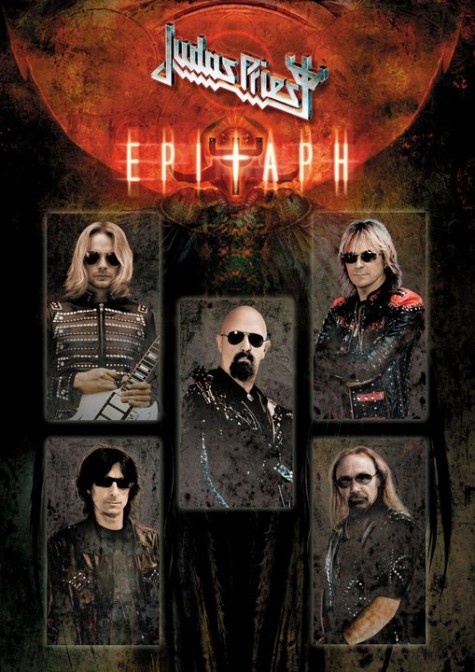 EverythingRock recently conducted an interview with guitarist Glenn Tipton of British heavy metal legends JUDAS PRIEST. A couple
of excerpts from the chat follow below.

EverythingRock: It’s pretty well publicized that K.K. Downing left earlier this year and he was replaced by a significantly younger guitarist, Richie Faulkner. Some critical fans might argue that he doesn’t fit in with the bands image. Do you believe choosing someone who isn’t within your own generation has better for the band?

Glenn Tipton: The only thing that was important for us was the guitar playing, really. At the end of the day, we wanted a guitar player that fitted in but it was the audio side of things that was important. We needed a person that fitted in musically and we got along with as well and it wasn’t a
concern for us whether that person was 50 years old or 20 years old, as long as it was the right man for the job.

EverythingRock: Just like Tim “Ripper” Owens and Scott Travis, Richie Faulkner was relatively unheard of until he joined PRIEST. These musicians hadn’t necessarily proven themselves on the same scale as you and you could say it was a bit of a risk. What makes you take this risk?

Glenn: Well, it wasn’t really a risk once we’d heard him play. I mean, I take your point. It was a difficult time for is, it was time when we almost gave up and if we hadn’t have found Richie, I don’t think we’d be on tour today. It had to be the right man for the job. Richie was recommended to us and we checked him out online and I asked him up to the studio and said, “Show me what you can do,” and I just knew straight away he was the man for the job. The beauty about Richie is he’s never tried to replace what Ken did. He does it in his own way and that’s the magic of it. Straight away we were all amazed at the contradiction; that he can do his own thing but he really blends in and works with PRIEST, we were all astonished by it.

EverythingRock: JUDAS PRIEST are well known for their dual lead guitar sound. I imagine that because of this, you and K.K. must have built a pretty strong musical relationship. Did you find it difficult to adapt to playing with Richie?

Glenn: Well, no, and that’s the reason it works with Richie and works so well for us. Straight away there was something there, a connection there. I don’t think it matters how good a guitar player you are, to try and represent what me and Ken have got is a very difficult thing to do. We’ve worked hard through the years to forge a path ahead between twin lead guitars and we’re very proud of that and I think a lot of people were inspired by that. It was a difficult thing to achieve but Richie is just astounding, really, because he’s stepped in and in his own way he’s just blended into the band so well.
Read the entire interview at EverythingRock.