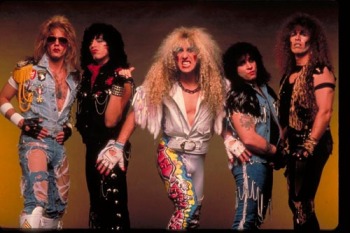 Quality fan-filmed video footage of TWISTED SISTER‘s performance at this year’s edition of the Download festival on June 11, 2011 at Donington
Park in Leicestershire, United Kingdom can be viewed below.

When asked in a recent interview with Über Rock if there are any plans for TWISTED SISTER to release a new studio album, guitarist Eddie Ojeda said, “We have discussed it as a band, but right now it’s not the focus of the band and definitely not something we plan on doing. But we never say never, because you never know what’s gonna happen in the future. We may do a single here and there possibly; I don’t really know.

“The way we see it is new material will take so long to write and record. When other bands do new material, it doesn’t seem to get noticed and people still want to hear the old stuff.

“When I see bands play like [IRON] MAIDEN or [JUDAS] PRIEST, all these great bands, put out new stuff, it’s all good, but when they play it
live, the audience goes quiet on those songs, yet when they go back into ‘British Steel’ or ‘Screaming For Vengeance’, the audience comes
back to life and, you know, we can see that and it’s noted. It’s one of those things, and it gets, like, what’s the point in doing those things if it takes so
long to do the thing then for people to catch on? Especially for bands like TWISTED, it’s been so long between albums. It’s one thing when you’re
current and people are following each album, but for some of the ’80s bands, there are a lot of years between albums and coming up with a new one can be tough. . . We’ll see what happens in the future, but at the moment it looks like a no for new TWISTED SISTER stuff.”

Regarding what he thinks it is about TWISTED SISTER that keeps the band relevant in 2011 and keeps getting them good slots on big European festivals, Eddie said, “It’s just one of those things and we’re glad it’s still happening. It’s kinda hard to explain, because you never really know why, and all of a sudden people just seemed to get it more than they ever did or they’re just getting it. Whatever the reason, we’re definitely grateful to get that recognition for what it is we do, but I also think that what we do is all so unique and different than what every other band does. It kinda creates that interest and people want to hear us because we are different and we’re not really similar to other bands and what they do. We have something that’s unique and it’s still something people want to see and there are a load of people who never got the chance to see us back in the day.”

“Set The World On Fire”, the sophomore album from Los Angeles theatrical dark rockers BLACK VEIL BRIDES, is likely to sell between 20,000 and 25,000 copies in the United States in its first week of release, according to industry web site Hits Daily Double. The estimate was based on one-day sales reports compiled after the record arrived in stores on June 14 via Lava Music/Universal Republic Records.

BLACK VEIL BRIDES‘ debut album, “We Stitch These Wounds”, sold nearly 11,000 copies in the United States in its first week of release to land at position No. 36 on The Billboard 200 chart. The CD was released on July 20, 2010 via Standby Records.
“Everything is bigger — more songs, more vocals, more melodies,” proclaims vocalist Andy Biersack. “And it all came naturally; it’s not an attempt to try to outdo our first record, but we wanted to show how we had naturally grown as a band and as songwriters. This is my favorite record I’ve ever made — and most importantly, the best album anybody’s ever made.”

As previously reported, BLACK VEIL BRIDES will take part in a signing session and performance this coming Saturday, June 18 at Hot Topic in Hollywood, California.