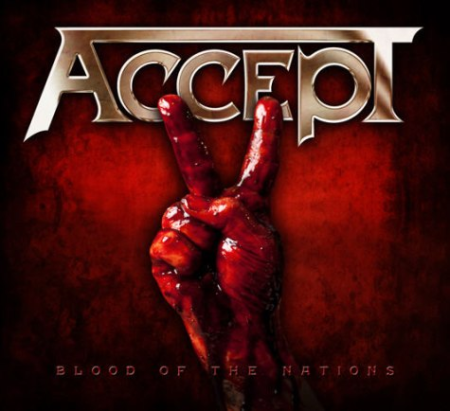 “Pandemic”, the new video from ACCEPT, can be viewed below. The song comes off the band’s latest album, “Blood Of The Nations”, which was
released in North America on September 14, 2010 via Nuclear Blast Records. Recorded at Backstage Studio in Derbyshire, England with
acclaimed British producer and SABBAT guitarist Andy Sneap (MEGADETH, EXODUS, ARCH ENEMY, MASTERPLAN), the CD marks the debut of the band’s latest addition, vocalistMark Tornillo (ex-TT QUICK).

ACCEPT performed its classic 1982 album “Restless And Wild” in its entirety — including such trend-setting gems as “Fast As A Shark”, “Restless & Wild” and “Princess Of The Dawn” — on January 25 at Z7 in Pratteln, Switzerland. These classic songs were supplemented with several new songs from their latest album, “Blood Of The Nations”.

ACCEPT kicked off its massive “Blood Of The Nations 2011 Tour” of Europe on January 14. The shows in Osnabrück, Bad Arolsen and Antwerp were packed with passionate metal-loving fans. The two-hour-plus performance pummeled the fans with classics like “Balls To The Wall”, “Metal Heart” and the immortal “Princess Of the Dawn”, completed with the pedal-to-the-metal bombast of ACCEPT‘s new hits “Teutonic Terror” and “The Abyss”.

A complete list of ACCEPT tour dates can be found at this location.

According to blabbermouth.net, “Around The World”, a new song from Seattle progressive rockers QUEENSRŸCHE, is available for free download from the band’s Facebook page. You must “like” the page in order to gain access to the track.
“Around The World” comes off QUEENSRŸCHE‘s twelfth studio album, “Dedicated To Chaos”, which will be released on June 28 in North America via Loud & Proud Records, a Roadrunner Records imprint focusing on established artists. The band is preparing to embark on a tour in support of the new opus, which was recorded in the group’s hometown and produced by Kelly Gray.
“Dedicated To Chaos”track listing:01. Get Started
02. Hot Spot Junkie
03. Got It Bad
04. Around The World
05. Higher
06. Retail Therapy
07. At The Edge
08. Broken
09. Hard Times
10. Drive
11. I Believe
12. Luvnu
13. Wot We Do
14. I Take You
15. The Lie
16. Big Noize
Check out the CD cover artwork below.QUEENSRŸCHE will release a new single, “Get Started”, on June 5. The track will be made available digitally on all the usual platforms.Audio samples of all tracks that will appear on “Dedicated To Chaos” are available for streaming at Amazon.com.When asked about the overall musical direction of the material on “Dedicated To Chaos”, QUEENSRŸCHE singer Geoff Tate recently told Paul Anthony of U.K.’s Rock Radio, “It’s kind of like an ‘Empire’ record set 25 years in the future. [Laughs] It’s a very listenable record, I think. I think people will find it interesting to listen to on headphones, especially. There’s a lot going on with it. And there’s definitely an emphasis on the rhythm section.

Eddie [Jackson, bass] and Scott [Rockenfield, drums] have written a lot of the songs on this particular record, so it really showcases what they do, which is something very special.”He added, “This record is definitely a boundary-pusher in a lot of respects, I think. It’s always difficult to describe music; it’s better to experience it. So I’ll let people hear it and make up their own minds.”QUEENSRŸCHE will guest on the nationally syndicated radio show “Rockline” with host Bob Coburn on Wednesday, June 29 at 8:30 p.m. PT / 11:30 p.m. ET. Fans are encouraged to speak with QUEENSRŸCHEby calling 1-800-344-ROCK (7625).For more information, visit RocklineRadio.com.