Maryland rockers CLUTCH took part in their first-ever acoustic in-store performance on Saturday, May 28 at Earshot Music & Movies in Greenville, South Carolina. The band’s set consisted primarily of selections from its “Basket Of Eggs” project from the “Blast Tyrant” deluxe reissue.

The charitable food pantry “Loaves And Fishes” was also on site that afternoon collecting canned food and non-perishables for the region’s recent weather-related victims. Earshot and Weathermaker Music set up a large “food basket” inside the retailer and those who donated a canned or non-perishable food item received a free CLUTCH tour poster and were first in line to have it autographed by the band after their acoustic performance.

Fan-filmed video footage of the performance can be viewed below.

The “Blast Tyrant” deluxe reissue sold 2,500 copies in the United States in its first week of release, landing at position No. 26 on Top Hard Music Albums chart, more than seven years after the original version debuted at No. 15. The double-disc package, which features the “Basket of Eggs” bonus CD, triumphed in the Northeast, where it broke into the Top 10 at the mammoth Newbury Comics chain, and was the No. 1-selling double disc.

CLUTCH kicked off a nine-date headlining tour on May 20 in Reading, Pennsylvania. The trek features MAYLENE & THE SONS OF DISASTER as main support. CLUTCH is keeping the average ticket price for these shows to a fan-friendly $17.50. CLUTCH has also confirmed a headlining run for this July, with CORROSION OF CONFORMITY serving as direct support. The tour will kick off with two special shows (July 20-21) in the New York area.

RockMusicStar.com recently conducted an interview with GREAT WHITE guitarist Mark Kendall. A couple of excerpts from the chat follow below.

RockMusicStar.com: I’m sure one of the first questions you get asked in interviews these days, is the one I’m about to ask. For all of the GREAT WHITE fans out there following along, can you please clarify what is going on with the lead-singer situation?

Mark: What’s happened is Jack (Russell) has had a ton of health issues that have literally made it impossible for him to perform. He was doing it (performing) with (the aid of) stools and we were getting ridiculed. People were saying, “Why are you taking that man out there (on stage) in that condition?” He’s getting a lot better, he just had another surgery, so hopefully he pulls it out. In the meantime, we’ve been using a guy called, Terry Ilous, who used to be from XYZ. He’s just filling in until Jack gets well, and the shows are going great. He does a real good job, so that’s going great.

RockMusicStar.com: That’s good to hear. While some people may be aware that Jack is not out on the road with you guys right now, many people want to know whether or not he will be back with the band at some point.

Mark: He wants to. In fact, he’s working out with a trainer and wants to come back. His voice is fine, but he just has to get himself a little more mobile before we take him out. We don’t want to do like, wheelchairs in the airport, if you know what I mean.

RockMusicStar.com: I understand. I know that no matter how old you guys get, playing rock and roll, you still want to bring a certain level of entertainment with your live shows.

Mark: Absolutely. We still want to have energy on stage. I don’t think he wants to go out, and have to sit down when we play. It’s just not good for our style of music.

RockMusicStar.com: Before Terry, you had Jani Lane (formerly of WARRANT) filling in for Jack. What happened with that?

Mark: You’re correct. He did a great, great job, it’s just – he’s got his own solo career and stuff. He did it as a favor for awhile, and then he became unavailable. He did a really good job. I was actually surprised.

RockMusicStar.com: Now that you’ve been playing with a couple different singers since Jack has been unable to perform, have you adjusted the set list at all, to accommodate their range, or vocal personality?

Mark: Terry seems to have all of his range still, while Jack has a few notes missing from the past. So he (Jack) doesn’t like to do certain songs, to where we’ve been able to kind of pull them out with Terry, because he can hit every note. Jack has always been kind of a perfectionist, and always tries to sing the songs pretty close to the record. He doesn’t want to go out, and do like a Freddie Mercury, and singing the songs an octave lower. He hates the idea of using a (pre-recorded background) tape, so there’s certain songs that he didn’t like to do, that we brought back to the set. So we can play more of the hits, and every song we’ve done videos for in the past — the MTV songs and stuff. It’s just a handful of songs. Just a few that we haven’t played in awhile.

Read the entire interview from RockMusicStar.com.

ANTHRAX drummer Charlie Benante spoke to Revolver magazine about the status of the recording sessions for the band’s long-awaited new
studio album, “Worship Music”, tentatively due in September via Megaforce Records in the U.S. and Nuclear Blast Records in Europe.

“Worship Music”, which was originally supposed to be released in 2009 and be the band’s first CD with singer Dan Nelson, will mark the first new ANTHRAX recording to feature vocalist Joey Belladonna in 20 years.

“With Joey singing them, they sound like classic ANTHRAX. The hair on my arms stood up when he started singing them. It was ANTHRAX once
again.”

“I think this record is more of a celebration for us,” Benante added. “We haven’t had a new record since 2003. The ups and downs in between really reflect the mood of this record. There is a lot of aggression, emotion and power. I feel like this is once again back to our New York style and attitude.”

During a chat with RockMusicStar.com, ANTHRAX singer Joey Belladonna was asked if working on the band’s new songs was a challenge
because of the fact that most of the material was written for previous vocalist, Dan Nelson. “I kind of hate that someone was already singing this stuff and now I have to kind of dance around it and do it all over,” he said. “They [the rest of ANTHRAX] have in their mind already how they want it to sound, so it’s kind of hard to shake it away. They are not going to say to me, ‘Go on and do something totally different and we will just dig it.’ [Laughs] It’s hard, but I’m not worried about it.” 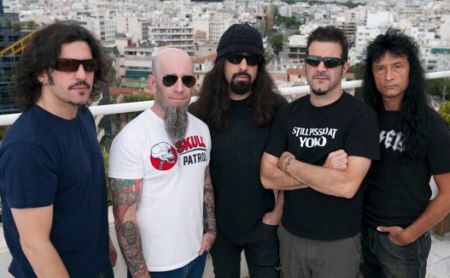