AVENGED SEVENFOLD AND BULLET FOR MY VALENTINE SECURED FOR UPROAR FESTIVAL. REMEMBER THOSE “HAIR OF THE DOG” GUYS…THEY’RE STILL ROCKIN’ NEW TUNEAGE. THE RONNIE JAMES DIO “STAND UP AND SHOUT” CANCER FUND HAS RAISED $450,000!!!

AVENGED SEVENFOLD will headline the second annual Rockstar Energy Drink Uproar Festival, set to kick off August 26 and run through October 15. Also scheduled to appear are THREE DAYS GRACE, SEETHER, BULLET FOR MY VALENTINE and ESCAPE THE FATE on the main stage.SEVENDUST, BLACK TIDE, ART OF DYING and THE BLACK CLOUD COLLECTIVE will perform on the Best Buy Music Gear stage.

“When we started hearing from our fans they wanted to see us back onUproar this year, we thought, last year was a blast so let’s do it again. The fans are crazy and the bands kick ass,” says AVENGED SEVENFOLD‘s frontman M. Shadows. “We’re spending the first half of summer playing some big European festivals so we’re going to be ready to get back home and play America’s top rock festival.”

The Rockstar Energy Drink Uproar Festival will entertain fans with a full afternoon and evening of great rock bands and will also include a concourse midway featuring band autograph signings, vendors and other activities. The festival is being produced by John Reese, John Oakes and CAA in conjunction with Live Nation. Look for tour dates, cities and venues to be announced in the coming weeks.

The Rockstar Energy Drink Uproar Festival is proud to continue their alliance with Child Find of America, a national not-for-profit organization dedicated to the prevention and resolution of child abduction. In addition, the Rockstar Energy Drink Uproar Festival has joined forces with theRoad 2 Recovery Foundation, a nonprofit organization dedicated to providing AMA licensed professional motocross and supercross riders with financial assistance if they sustain career-ending injuries. The organization also provides motivational, emotional and spiritual support to these individuals and their families.

A portion of the proceeds of each Rockstar Energy Drink Uproar Festivalticket sold will benefit Child Find of America and the Road 2 Recovery Foundation.

“We’re excited to work with the Road 2 Recovery Foundation, since so many of the Uproar crew are fans of Motocross or just love to ride,” saysMike Kelso, Marketing Director for Rockstar Energy Drink.

Originating in Dunfermline, Scotland in 1969 from the ashes of the semi-professional band The Shadettes, Nazareth — Dan McCafferty (vocals), Manny Charlton (guitar), Pete Agnew (bass) and Darrell Sweet (drums) – made it big after relocating to London and landing a recording contract with Pegasus records. They released their self titled debut album in 1971 and a second album Exercises 1972. It was their third release Razamanaz, in early 1973, that resulted in their first charting singles, “Broken Down Angel” and “Bad Bad Boy”, both of which made it into the UK Top Ten.

They followed this in late 1973 with, Loud ‘N’ Proud and then Rampant in 1974 both seeing equal success. But it was the release, in 1975, of Hair of the Dog that saw Nazareth’s biggest hit with the title track – most commonly but mistakenly known as “Son of a Bitch” due to the chorus lyrics – which, thanks to regular air play, helped the album to achieve platinum status. The US release version of the album contained the additional track “Love Hurts”, a remake of the The Everly Brothers song. Nazareth’s melodic hard rock sound and frontman Dan McCafferty’s whisky saturated, raw, emotive vocals kept Nazareth on the public radar for the of the rest of the 70s. And despite several incarnations of Nazareth they are still touring and recording today.

Hence, this new rock and roll record with a “big bite!” 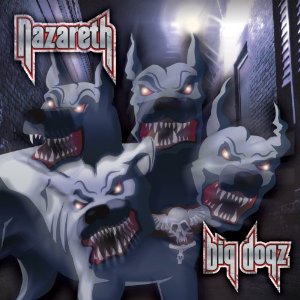 The Ronnie James Dio “Stand Up And Shout” Cancer Fund, which was founded in memory of the late singer who died in 2010, has raised over $450,000 for cancer research. Later this year, the fund will team up withChristie’s, an international company that offers art auctions and private sales to clients, for a guitar and bass auction in New York City, with all proceeds going to the fund. Almost 100 instruments have been donated, including guitars from many superstars such as Eddie Van Halen, Slash,Sting, METALLICA, SLAYER and Geddy Lee.

Created by Ronnie‘s wife/manager Wendy, the Ronnie James Dio “Stand Up And Shout” Cancer Fund is committed to the early detection and prevention of cancer through facilitating access to medical screening and medical educational programs. The fund supports programs designed to integrate medical knowledge into local communities such as cancer screening programs, education on nutrition in cancer prevention, exercise and overall wellness. The goal of the fund is to reduce the risk of developing life-threatening cancers by offering access to preventative medical services. Furthering the commitment for patients to access to quality medical care related to cancer, the fund seeks to assist families burdened by the cost of caring for loved ones with cancer.

Regarding her decision to form the Ronnie James Dio “Stand Up And Shout” Cancer Fund, Wendy said in a December 2010 interview, “We decided, when Ronnie passed… ’cause his goal was he wanted to get well and do a charity and raise money for cancer research. And so when he passed away, I decided I would carry on and do that — giving it to M.D. Anderson, giving it to T.J. Martell [Foundation for Leukemia, Cancer and AIDS Research], helping kids out with things. We have a choice of what we can do with that money and it’s gotta go to the right place.”

For more information on the Ronnie James Dio “Stand Up And Shout” Cancer Fund, go to this location.