SHARON OSBOURNE SAYS “OZZY HAS BEEN IN A VERY DARK PLACE.”

Ozzy Osbourne‘s wife/manager Sharon has shot down reports that the couple were divorcing after 31 years of marriage, insisting that they will overcome their problems and stay together. On today’s (Tuesday, April […]

FREAK HOUSE FIRE INJURES OZZY OSBOURNE A freak fire in the home of Ozzy and Sharon Osbourne early this morning (Jan. 17) has left metal music’s ‘Prince of Darkness’ with singed hair, no eyebrows, […]

Ozzy Osbourne and his wife/manager Sharon Osbourne spoke to Britain’sHello! magazine about their son Jack‘s revelation that he has been diagnosed with multiple sclerosis. “I keep thinking, ‘What did I do wrong? What did […]

SHARON OSBOURNE SAYS, “I JUST LIE THERE AND THINK OF THE QUEEN.”

After spending a few seasons watching Ozzy Osbourne putter around his kitchen in ‘The Osbournes,’ we thought nothing could surprise us about the domesticated Prince of Darkness — but as […]

Sharon Osbourne has taken to Twitter to dispel rumours that she fired drummer Bill Ward from the recently reunited Black Sabbath lineup. Sharon Osbourne – who is the long-time manager […] 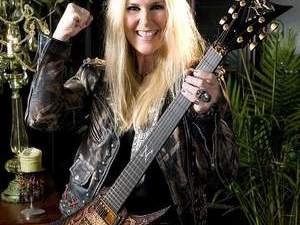 I  have been a big fan of Lita Ford for a long time. I did come to the game late though not having discovered Lita until the “Kiss Me Deadly,” […]