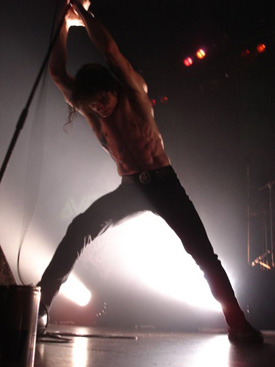 Each episode of Digital Tour Bus‘s “Dream Tour” features a touring act discussing who they would put on their ideal tour if there were no limits. In this episode, vocalist Bobby “Blitz” Ellsworth of New Jersey thrash metal veterans OVERKILL reveals his dream tour lineup.

He continues: “We’re a thrash band that happened in the ’80s. And when thrash happened in the ’80s, the rules were being written by the guys in it, I suppose, to some degree, including myself. But I think the quintessential thrash band back then was a band from Los Angeles, California called SLAYER, who we actually became friends with — kind of cousins, let’s say, from different coasts; we’re New Jersey guys, they’re Los Angeles guys. They took us out on our first tour, and we thought it was just the most incredible experience to be touring with a band that was levels up from us.”

Blitz adds: “What ended up happening a couple of years after that was SLAYER was putting together another tour with my favorite band that’s ever walked the face of the earth, and that’s MOTÖRHEAD. And you can tell by the name OVERKILL we got it from somewhere, and we were huge MOTÖRHEAD fans doing MOTÖRHEAD covers in the old days. But that tour was SLAYER headlining, MOTÖRHEAD in the middle, and we opened the show, and it was a blast.”

As previously reported, OVERKILL has inked a new worldwide deal with Nuclear Blast Records. Previously signed to the label for Europe only, OVERKILL‘s first worldwide release on Nuclear Blast will be a special box set comprised of the band’s entire back catalog, due out this fall.

OVERKILL and SYMPHONY X will join forces for a North American tour in September/October. The 24-date co-headlining trek launches at The Palladium in Worcester, Massachusetts on September 18, hits four Canadian cities, then wraps up with a very special night at Terminal 5 in New York City on October 17 — the first time in the bands’ combined histories that they’ll play a show together in their own backyard.