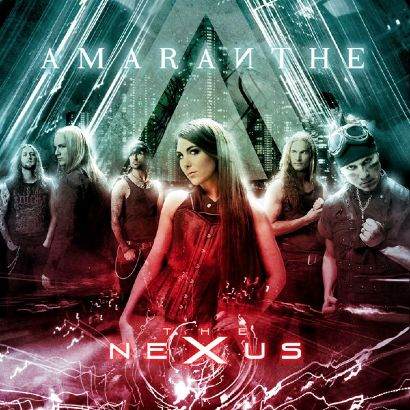 the track was directed by Patric Ullaeus of Revolver Film Company, who has previously worked with DIMMU BORGIR,LACUNA COIL, IN FLAMES, SONIC SYNDICATE and KAMELOT, among others. Check out the clip below.

Commented Mörck: “This time we went all the way with our futuristic dream-nightmare — a no-compromise vision steeped in deep contrast between the mechanically ultra-heavy and shimmering serene melody.‘The Nexus’ is everything we dreamed about doing with our debut album; we laboured to make this offering as diverse as it is direct and catchy… and remember, no-one can be told what ‘The Nexus’ is — you have to hear it for yourself!”

He added: “Our main inspiration behind the [‘The Nexus’] video was to create a decidedly cinematic feel, in the vein of a Hollywoodaction movie

, with a slightly darker angle than our previous videos. We wanted to have lots of extras and explosive action scenes, and we wanted it to be done well; we knew Patric Ullaeus was the right man for the job. The end result is a dynamic, intense and entertainingmusic video

with an original flair.”

The guitarist previously stated about the upcoming CD: “We have lived and breathed the same 12 songs

from the first album every day for a year now, and to introduce a number of completely fresh tracks will really lift AMARANTHE to the next level!
“The theme and atmosphere of the album is futuristic and ultra modern, [and] the music

itself [is] instantly recognizable as AMARANTHE, but there is definitely a new and unique twist to the songs.

“People often ask us if there is a big pressure to follow up such a successful album, and always say ‘no, not one bit.’ Not when you sit down and listen to new tracks such as ‘Invincible’, ‘Burn With Me’ and‘Stardust’. We simply cannot wait to hit the road all over the world with these new babies!”

AMARANTHE‘s self-titled debut album was released in Europe in April 2011 via Spinefarm Records.

“Rise Of A Digital Nation”, the new video

from the Swedish “alternative metal” band MACHINAE SUPREMACY, can be seen below. The song

is the title track of the group’s latest album, which was released last October via Spinefarm Records. According to a press release, the CD “echoes the musical

simplicity of [2008’s] ‘Overworld’ and faithfully reflects the issues and state of a Generation Online in its lyrics.” The album was recorded in MACHINAE SUPREMACY‘s own studio in Luleå, Sweden, with additional recording at the 4Sound Studio in Stockholm. It was mastered by Henkka Niemistö at Chartmakers in Finland.

game-inspired sounds and melodies, masterful guitar work and unique vocal style has set the band apart from the mainstream mass of generic rock and metal since their beginning in 2000. Metal Hammer calls MACHINAE SUPREMACY “one of the most interesting bands

of the current era” in their review of the U.K.-only best-of collection “The Beat of Our Decay” from 2011.

Since the release of its fourth studio album, “A View From The End of The World”, MACHINAE SUPREMACY has toured Europe with CHILDREN OF BODOM and ENSIFERUM, and signed with Spinefarm for three more albums.