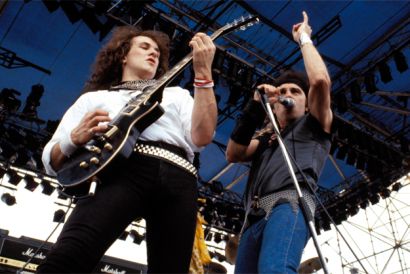 Former DIO and current DEF LEPPARD guitarist Vivian Campbell revealed in April 2012 that he is planning to join forces with three other original DIO members to play “some gigs” that will see the musicians performing material from the early DIO records that Campbell appeared on. Dubbed LAST IN LINE, Campbell, Vinny Appice (drums), Jimmy Bain (bass) and Claude Schnell (keyboards) will be accompanied by singer Andrew Freeman, who has previously fronted HURRICANE and LYNCH MOB.

Speaking to David “Gus” Griesinger of BackstageAxxess.com at last month’s NAMM (National Association Of Music Merchants) show at the Anaheim Convention Center in Anaheim, California, Campbell stated about reuniting with the original DIO band (see video below): “I’m excited about that. We’re calling it LAST IN LINE after the second [DIO] album. It’s the original DIO band — myself, Vinny Appice on drums, Jimmy Bain on bass,Claude Schnell on keyboards, and we found a terrific singer called Andy Freeman, who can totally do justice to the songs. Actually, he doesn’t sound anything like Ronnie [James Dio], which is great, [because] I don’t wanna draw that comaprison. Ronnie was a very unique singer, but Andy is a great singer in his own right, and he certainly sings the songs very respectfully.

“The original band, we actually wrote the majority of that material as a band, so I feel like we’re entitled to go out and play it. I don’t think we’re a tribute band or a cover band or anything like that.

“There’s obviously a big legacy of DIO music, and I think I’m right in saying that most people would think that those early DIO albums are the strongest, so we are just chuffed to play it.

“Right now we’re in the middle of booking a European tour. It looks like we’ll start in probably Bulgaria or somewhere like that in July. We’ll do a few regional warm-up shwos in Southern California and Nevada and Arizona, probably, in June or July.

“We just started rehearsing and it sounds fucking amazing.”

Campbell and Ronnie James Dio worked together on the first three DIOalbums 1983’s “Holy Diver”, 1984’s “The Last in Line” and 1985’s “Sacred Heart” — before Irishman Campbell left to join WHITESNAKE in 1987.

Speaking to Rush On Rock in January 2011, Campbell had this to say about the passing of the iconic singer: “I was numb to the whole thing. I hadn’t talked to Ronnie in 25 years, so it wasn’t as if we were close. My mother died nine or 10 days before him, so I was preoccupied with that. And my father died nine months before that. It was a really tough year on a personal level, and I had enough to think about.”

He added, “The news about Ronnie James Dio just bounced off me. It was a difficult relationship on a personal level anyway. I was really proud of the music we made together but it was tough being in a band together. But he died way too young.”

In a May 2011 interview with Brazil’s Roadie Crew magazine, Wendy Dio stated about the controversy surrounding Ronnie‘s relationship with Campbell (in a 2003 interview Vivian called Ronnie “an awful businessman and, way more importantly, one of the vilest people in the industry.”), “[Vivian] always said that he hated all the albums that he played on with Ronnie, and that was very hurtful to Ronnie. Very hurtful. Would you like someone who said something like that about your albums? He said a lot of things in the press that I don’t wanna get into, because it really wasn’t Ronnie‘s feud at all. Ronnie didn’t fire him. I fired [Vivian]. He wanted as much money as Ronnie wanted. He thought he was as important as Ronnie was, and that was just wrong. But I don’t wanna get into that. It’s water under the bridge. It doesn’t matter.”

Last in Line happens to be my favorite DIO song : Dio’s The Last in Line