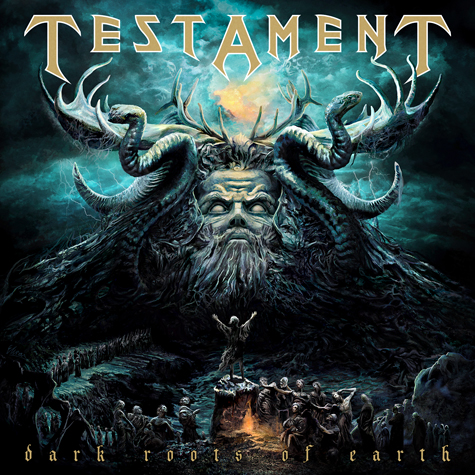 RISE UP! Be counted! Thrash metal keeps thrashing mad year after year and the past few years have been absolutely stellar.

With this release, OVERKILL’S The Electric Age and Ironbound, MEGADETH’S Thirteen, and ANTHRAX’s Worship Music the old guard still rules the metal universe!!

From the opening riff to the last TESTAMENT never lets up. The long respected Alex Skolnick reaches new heights with the riffage on this disc while the vocals of Chuck Billy have never sounded angrier or more powerful. These guys are tighter than a sphincter at a prostrate exam. I mean that in a good way. Really, I do.

The opening track Rise Up will give you whiplash and make you wanna start a revolution. The second track and only single and video from DARK ROOTS OF EARTH, Native Blood is a proud primal scream and testament to Chuck Billy’s heritage, their underappreciated thrash metal legend and Skolnick just plain tears through a fierce, impressive double solo.

Title track Dark Roots of Earth is heavy, honest, and hard with more stellar work from the entire band. WOW.

True American Hate is where things speed up and get metal thrashing mad. Properly done. A master class in thrashing goodness.

A Day in the Death is a groovetastic swingin’ metal mosher. I LOVE this song!

Man Kills Mankind is heavy, hard hitting, and continues the theme of man being it’s own worst enemy. The mid-song tempo changes and entire second half of the song are pure cranking the volume to 11 material!

The atmospheric, foot stomping, head bangin’ good Throne of Thorns follows. Deliciously dark lyrics, infectious breakdowns, and another fantastic lead by Alex Skolnick make this one of my favorite tracks on the album.

The rest of DARK ROOTS OF EARTH, is equally and at some points even better than the early tracks.

All in all, I rate TESTAMENT’S – DARK ROOTS OF EARTH one of the finest thrash metal albums of the past five years.