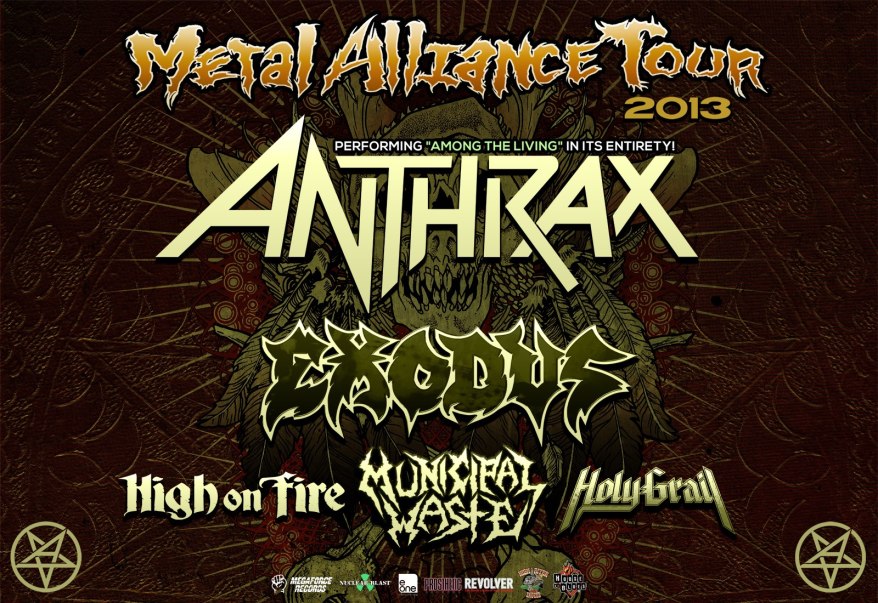 ANTHRAX recently spent time in the studio recording several cover versions of some of their favorite rock classics, to be included with the upcoming “Anthem” EP, due on March 18.

The track listing for the effort is as follows:

“It was a lot of fun, especially because a lot of those [songs] aren’t, I guess, normal for us or like so much of our repertoire — although they are because they’re songs we all knew,” guitarist Scott Ian tells Billboard.com. “Maybe on paper the idea of us doing something like that seems weird, until you hear them and then it makes sense. And Joey‘s performance on theJOURNEY song, specifically, really blows my mind. Someone mentioned that [JOURNEY guitarist] Neal Schon better not hear this or we might lose our singer.” ANTHRAX also also laid down a cover version of BLACK SABBATH‘s“Neon Knights” for the upcoming Ronnie James Dio tribute album which is being assembled by the singer’s widow and longtime manager Wendy Dio.

Regarding ANTHRAX‘s upcoming touring activities, Ian tells Billboard.com: “We thought last month was going to be the end of the cycle; that was pretty much the plan at the beginning of last year. [2012] was a really good, busy year, and when we finished in Europe in December we figured that was it. But we keep getting more and more offers to go on tour. We’ve always been a touring band, so that works in our favor, I guess. In the past we wouldn’t think about doing the States four times unless you were selling millions of albums or something. But there’s a demand for it, which makes us happy.”

“Worship Music”, the group’s first new album in eight years and first with singer Joey Belladonna since 1990, came out in September 2011. The has sold more than 100,000 copies in the U.S., according to Nielsen SoundScan. A track from the CD, “I’m Alive”, received a Grammynomination last month for “Best Rock/Metal Performance”. This is the fourthGrammy nomination for ANTHRAX.

As reported on Friday, guitarist Rob Caggiano has announced his departure from ANTHRAX to focus on his other passion: producing records.

“Jon is a bro and he’s also a total fucking ripper,” said Scott Ian. “I’ve worked with him twice before on side projects and he tears it up. I’m excited to have him on my right burning up the stage with ANTHRAX. 13’s gonna be a good year.”

“I grew up on ANTHRAX, they’re the thrash scene, they’re one of the ‘Big Four,’ I’d be crazy to not want to play with them,” said Donais. “Initially,Rob called and told me he was leaving the band, and asked if I’d be interested in filling in. Then Scott called me and everything fell into place.Rob and I are using Skype to work on solos and other guitar parts, so he’s being great. I also have to give special thanks to my band — Brian, Matt,Jason and Ed — who have been incredibly supportive and encouraged me to do this.”

Caggiano announced his departure from ANTHRAX on January 4 to focus on his other passion: producing records. The remaining members ofANTHRAX said in a statement: “Rob has been an integral part of ANTHRAXfor so many years, as our lead guitarist, in a production capacity, but most of all, as our close friend. His contributions to the band have been enormous. While we are sad that he is leaving, we wish him nothing but great success going forward, and hope to share the stage with him again sometime down the road.”

Caggiano — whose two stints with ANTHRAX ran from 2001-2005 and 2007 to now — stated about his decision to leave the band: “We accomplished so many great things together over the years and I shared some of the best times of my life with these guys. As a band, we also weathered quite a few storms along the way. It’s been a wild ride (to say the least) from Day One and I wouldn’t change one single thing about the last 12 years.”

Caggiano added that, “This is an extremely difficult and emotional decision for me to make, but my heart is just steering me in a different direction right now. I’ve always been one to follow my heart in everything that I do and while this might be one of the hardest decisions I have ever had to make, it feels like the right one for me at this time. Scott [Ian, guitar], Charlie[Benante, drums], Joey [Belladonna, vocals], Frankie [Bello, bass] (and [former ANTHRAX singer] John Bush) will always be part of my family and this decision doesn’t change the way I feel about that in the slightest. I would also like to say thanks to all the amazing fans I’ve met and hung out with worldwide over the years. You guys always were and always will be the reason why I make music!”