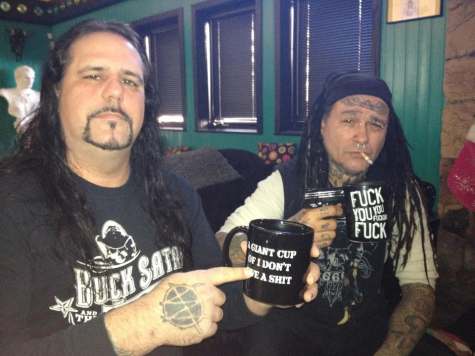 MINISTRY mainman Al Jourgensen has releasd the following statement regarding the passing of the band’s guitarist, Mike Scaccia:

“I just lost my lil’ brother and my best friend. The 13th Planet compound is devastated, completely in shock and shattered. Mikey was not only the best guitar player in the history of music, but he was a close, close, close part of our family — and I just lost a huge chunk of my heart today. Our lives are forever changed. Life without Mikey is like orange juice without pulp — kind of bland. I have no words to express what this guy meant to me, my family, my career… everything!

“Get to know his lead parts — for they are in the pantheon of music! Unfortunately, most of you didn’t get to know Mikey‘s soul — which is in the pantheon of humanity. He is my hero, my friend and my idol. Mikey was always beside me — my right-hand man — through thick and thin, the good, the bad, the ugly and the beautiful.

“Rest in peace my brother, my friend, my heart.

“Please pray for Mike Scaccia and Jenny, his wife and their children, and his family.”

Scaccia, who is also known for his work with RIGOR MORTIS and theREVOLTING COCKS, died last night (Saturday, December 22) after suffering a seizure on stage from what was reported by some friends to be a heart attack. He was 47 years old.

Scaccia was performing with RIGOR MORTIS at The Rail Club in Fort Worth, Texas at the 50th-birthday celebration for RIGOR MORTIS singer Bruce Corbitt when he reportedly asked for the strobe lights to be turned off moments before he collapsed onstage and could not be revived. He was taken to the hospital where he was pronounced dead.

Mike is survived by his wife Jenny Rowen Scaccia, with whom he has two toddlers, and daughters Sarah Scaccia and Taarna Scaccia Hopkins.

In 1989, Scaccia was asked by Jourgensen to join MINISTRY for their 1989-1990 “The Mind Is A Terrible Thing To Taste” tour. Jourgensen was so impressed by Scaccia‘s talents that he included him into the band full time. Scaccia left RIGOR MORTIS in 1991 and went on to record and tour for MINISTRY‘s next album, the platinum-selling smash “Psalm 69”throughout 1992. He also recorded MINISTRY‘s follow-up effort, “Filth Pig”, before leaving the band in 1996.

Pictured below (left to right): Mike Scaccia and Al Jourgensen