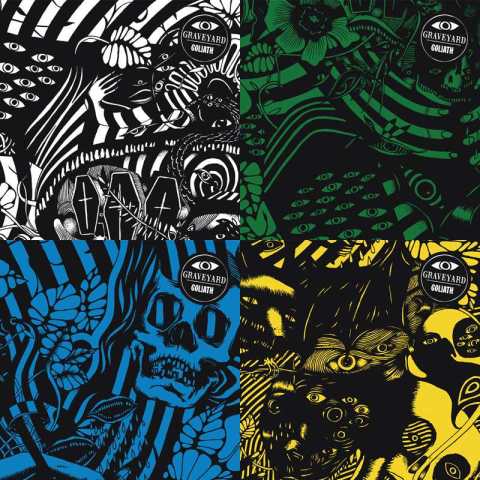 The official lyric video for the song “Goliath” from Swedish blues rockersGRAVEYARD can be seen below. The track comes off the band’s third album, “Lights Out”, which will be released on October 26 via Nuclear Blast Records. The “Goliath” single will precede the full-length CD on September 21 as a digital download and on seven-inch vinyl. The single will include a special non-album track, “Leaving You”. The “Goliath” seven-inch vinyl will be issued in four different colors, featuring four different cover artworks.

GRAVEYARD recently filmed a video for “Goliath” with director Artur Wolgers. The clip was shot in a lo-fi way, just like GRAVEYARD‘s stunning video for “Hisingen Blues”, the title track of the band’s previous album.

Regarding the “Lights Out” cover artwork, GRAVEYARD states, “The cover is something completely different than the last cover. It has a lot to do with the title, ‘Lights Out’. Our goal was that both the title and the cover would sum up the feeling of the album. And just to make things clear, ‘Lights Out’is not a reference to either UFO or ENTOMBED. Even though both are excellent bands.”

Comments the band: “The [‘Goliath’] lyrics deal with the feeling that everyday life is a constant David vs. Goliath scene. You all know the story and the scene. You look around, get pissed off and want to ‘stick it to the man.’ Musically, it has many influences. And, as usual, we’ve tried to get it both heavy and swinging at the same time.”

GRAVEYARD was honored with the “Best Hard Rock/Metal” award at the Swedish “Grammis” gala, which was held on February 14 at Kungliga Operan in Stockholm.

GRAVEYARD‘s second full-length album, “Hisingen Blues”, sold 1,000 copies in the United States in its first week of release. The CD landed at position No. 48 on the Top New Artist Albums (Heatseekers) chart, which lists the best-selling albums by new and developing artists, defined as those who have never appeared in the Top 100 of The Billboard 200.

“Hisingen Blues” entered the official chart in Sweden at position No. 1.