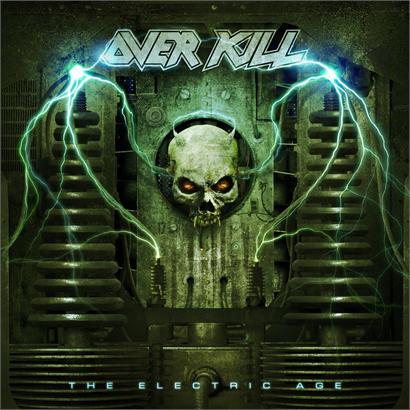 Over the decades it’s been proven that most bands musical output fades and dims as they age. Case in point, METALLICA. They haven’t produced a high quality album since THE BLACK ALBUM.

I suppose the success of that album led them astray. After the monumental sales and endless touring METALLICA was spent and have never recovered.

MEGADETH is a band that only recovered from big success after failing mightily for several years. MEGADETH’S last few albums have been high points in thrash metal but no band has reached as high in the past few years than the often overlooked fifth thrash metal legends, OVERKILL.

As with 2010’s IRONBOUND, THE ELECTRIC AGE is triumphant and a thrash metal masterpiece. Lead vocalist Bobby “Blitz” Ellsworth sounds magnificent throughout the album while the rest of the band nails every note and beat.

ELECTRIC AGE is loud, fast, angry, and philosophical. My favorite track is “Black Daze,” with it’s chugging riffs, call and answer chorus, and spot on breakdowns it makes the headbanger in me come out with ferocity. I love the solo on this track and with it coming in at under four minutes it leaves you wanting more “Black Daze.”

The three opening tracks are pure thrash heaven: “Come and Get It,” “Electric Rattlesnake,” and “Wish You Were Dead,” are fantastic metal songs but in comparison to what is to follow are merely warmups. The real classic metal moments are in songs like “Black Daze, and “Old Wounds, New Scars.”

Following “Black Daze,” is “Save Yourself,” a speed metal master class of a song.  The entire album comes in at a rejuvenating 50 minutes total. I love when I can live an entire musical experience in under an hour!

“Drop the Hammer Down,” is another speed metal gem that has Bobby really showing his vocal chops and has some IRON MAIDEN elements in it. OVERKILL meets MAIDEN. Hell Yeah!

Another of my favorites on this album is the anti-information overload rant of “21st Century Man.” Heavy, fast, and intelligent, as metal should be.

Finishing out the disc are “All Over But the Shouting,” and “Good Night.” Sonic blasts of classic thrash.

No other band on the planet is making music this powerful and pure right now.

OVERKILL’S ELECTRIC AGE is my metal album of the year, so far.