RUSH CLOCKWORK ANGELS: THE NOVEL GETS RELEASE DATES FOR AUGUST! 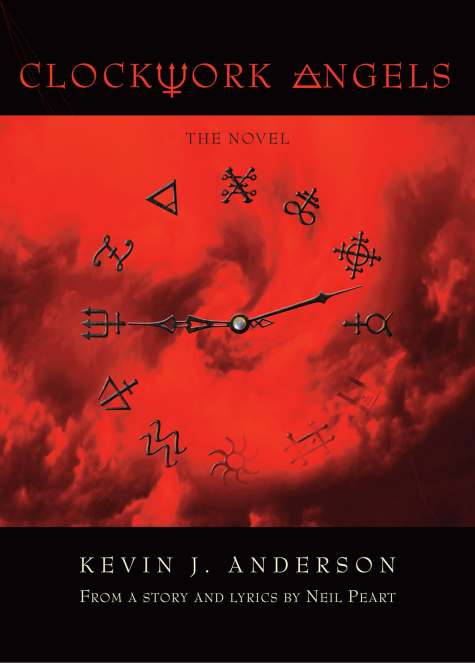 “Clockwork Angels: The Novel” (ECW Press, September 2012), the landmark literary collaboration between RUSH drummer and lyricist Neil Peart and bestselling sci-fi author Kevin J. Anderson, will be officially launched on Thursday, August 23 at the Richmond and John Chapters (142 John Street) in Toronto, Ontario, Canada at 7:00 p.m. Anderson writes on his blog, “I’ll be in Toronto as a guest at Fan Expo throughout the weekend, but this event — open to the general public — will be the first time the novel is available for sale. I will give a talk, answer questions, and autograph books… lots of them, I hope!”

The U.S. book launch will be held on August 31 at DragonCon in Atlanta, Georgia.

The Silver Edition, slipcased and autographed by both Kevin J. Anderson and Neil Peart, will be a beautiful addition to any collection. This limited edition of 300 copies is available from both ecwpress.com/clockworksilver and rushbackstage.com for $74.95.

The Gold Edition is a must have for die-hard fans. Slipcased and signed by both authors, The Gold Edition is accompanied by a lithograph image from the book, signed by artist Hugh Syme, and a unique autographed page of the original “Clockwork Angels” manuscript. Both pieces are presented in an attractive frame with an engraved and numbered plate. With only 302 copies available, the Gold Edition will retail for $299.95, and is available exclusively from rushbackstage.com.

Kevin J. Anderson recently wrote on Facebook, “Most of you are aware of my long-standing friendship with (RUSH drummer) Neil Peart . . . For more than twenty years, Neil and I have wanted to collaborate on something MAJOR, a way we could tie together our imaginations, and at last that’s happening. I’m writing the novelization of RUSH‘s forthcoming album, ‘Clockwork Angels’.”

Anderson added that he worked with Peart to “flesh out the epic story told over the course of the music,” which involves “lost cities, pirates, anarchists, exotic carnivals, and a rigid Watchmaker who imposes precision on every aspect of daily life.”

Regarding the book cover, which can be seen below, as well as the rest of the package, Anderson said, “[It is] one of my most beautiful covers ever. The central image is from the newest RUSH album, with the type and cover design by Neil Peart. ECW will publish the hardcover in September (available for preorder now), a full-color volume with paintings and complete lyrics (and the novel itself, of course).

“From the sample pages I’ve seen already, this will be a gorgeous book.

“The novel is a colorful steampunk fantasy, and I think it has a great deal of heart. Neil and I are very pleased with how it turned out-the creative synergy was amazing.

“‘Clockwork Angels: The Novel’ follows the story mapped out in the songs of the album, but the book isn’t only for RUSH fans (then again, who isn’t a RUSH fan???).”