WATCH METALLICA PLAY “ESCAPE,” FROM RIDE THE LIGHTNING FOR THE FIRST TIME EVER. 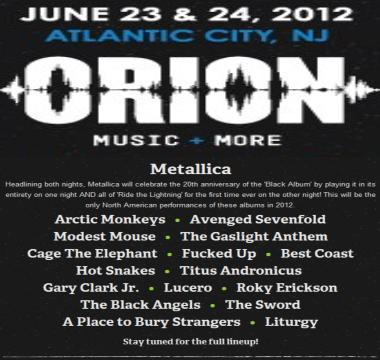 METALLICA‘s two-day festival Orion Music + More kicked off last night (Saturday, June 23) at the popular Atlantic City, New Jersey concert venue Bader Feld. METALLICA is headlining both nights of Orion Music + More and playing “Ride The Lightning” in its entirety One night and “The Black Album” in its entirety the other. This will be the only time the band will perform these albums in North America in 2012.
In an interview with CBS Local, METALLICA lead guitarist Kirk Hammett said, “I know ‘Ride The Lightning’ forwards and backwards. It’s not like ‘The Black Album,’ where there are three or four songs that we rarely play. Over the course of the years, we’ve played most of ‘Ride The Lightning’, except for one song we’ve never done, ‘Escape’. It was pretty easy [to re-learn those songs]. We put way more time into learning ‘The Black Album’ than ‘Ride The Lightning’.”
Video footage of METALLICA performing the song “Escape” live for the first time ever last night (Saturday, June 23) at the Orion Music + More festival can be seen below.
Orion Music + More features multiple live music stages plus a lifestyle element that reflects each of METALLICA‘s bandmembers’ many personal interests.
When asked why METALLICA would want to do their own festival, guitarist/vocalist James Hetfield said in a recent interview, “First of all, because we can. Why wouldn’t you? We’re just trying to bring a little more of a mix to what is going on. . . . I think the Europeans are able to look at a festival more as an event than ‘my favorite band is playing.’ We’re not necessarily trying to reproduce that in the States, but we’d like to bring a little taste of that here.”
Regarding the significance of the “Ride The Lightning” and “Metallica” albums, Hetfield said, “‘Ride The Lightning’ started to splinter us off from your SLAYERs and other thrash bands. A song called ‘Fade To Black’ was an instant thorn in the side of the metal community. It was the first veering off the studded path. [The Black Album] became the album, I guess, that people needed to have. It’s a gateway for people to get into METALLICA.”