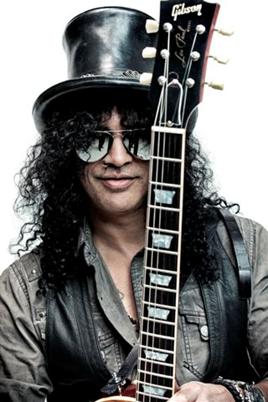 The Hollywood Chamber Of Commerce has announced that Slash will be honored with a star on the Hollywood Walk of Fame on Tuesday, July 10 in front of Hard Rock Café on Hollywood Blvd.

In celebration of the star dedication, Slash will perform at a private acoustic performance and exclusive question-and-answer session with Slash andMyles Kennedy at Hard Rock Café Hollywood Blvd. after the ceremony. Fans will have the opportunity to win tickets to the exclusive show by listening to KLOS 95.5 starting June 25.

Hard Rock has created a limited edition pin to commemorate the historic occasion of one of rock n roll’s most iconic guitarists receiving a star on theHollywood Walk Of Fame. Only 300 of these pins will be created and will be sold only at the Hard Rock Café Hollywood Blvd. with all proceeds benefitting the Los Angeles Youth Network and the Hollywood Historic Trust which maintains the iconic Hollywood Walk Of Fame.

Charlie Sheen, a neighbor and personal friend of Slash‘s who called himself a “Rock Star From Mars” when he underwent a public meltdown amid his firing from the CBS show “Two and a Half Men”, will speak at Slash‘s induction ceremony.

Fan-filmed video footage of HALESTORM‘s June 9 performance at this year’s edition of the Download festival at Donington Park in Leicestershire, United Kingdom can be seen below.

HALESTORM made history with its electrifying new single, “Love Bites (So Do I)”. The track — featured on the Pennsylvania-based band’s breakthrough new album, “The Strange Case Of…” — has ascended to No. 1 at Active Rock radio outlets nationwide, marking the first ever female-fronted group to top the format’s airplay ranking.

HALESTORM will celebrate its sensational success with an epic summer touring schedule, comprising a U.S. headline trek, high-profile festival appearances, a series of much-anticipated European dates, and a number of support slots alongside AVENGED SEVENFOLD.

Produced by Howard Benson (who previously collaborated withHALESTORM on their self-titled 2009 debut), “The Strange Case Of…”includes such explosive tracks as “Here’s To Us”, which shot to No. 1 oniTunes‘ “Top Rock Songs” chart after being featured in a February 2012 episode of Fox‘s hit series “Glee”.