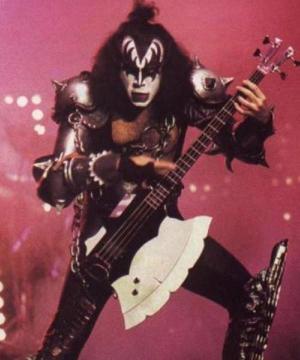 Gene Simmons is just full of surprises. In a recent interview on Motley Crue member Nikki Sixx‘s radio show, he revealed how one of the greatest guitarists of our generation, Eddie Van Halen, wanted to join Kiss after Ace Frehley left — and how Simmons himself turned him down.

In the early days of Van Halen, Simmons wasn’t optimistic about the band’s staying power but was nevertheless instrumental to their success, overseeing the recording of their first demo and even buying David Lee Roth his first pair of high-heeled boots.

Gene says that in 1982, after Kiss fired Frehley, Eddie showed up at a Kiss rehearsal session and played the synth part of VH’s future hit single, ‘Jump.’ Simmons recalls, “I say, ‘Eddie, what’s this?’ ‘Oh, that’s the next record.’ ‘Really? I’m hearing it before guitars?’ ‘No, there’s no guitars – that’s it.’ ‘Oh, okay.’” (For the record, some of us around here are equally as unimpressed with ‘Jump.’)

But then things get really interesting. Simmons told Sixx:

“So I take [Eddie] to lunch across the street and he actually tells me: ‘I want to join Kiss. I can’t take Roth – he’s driving me nuts. We’re not getting along. I’ve got this sound in my head that I want Van Halen to do, and Roth doesn’t want to do it, and we’re just getting to a point where he’s believing his own hype.’

“I remember feeling proud of what I said. I said: ‘Don’t do it. Stay with the band you started. There’s no role for you – you’re too big. You cast too much of a shadow to be the guitar player in Kiss.’

“And he went back and he was miserable for the next 20 or 30 years. But it would never have worked. Not even close.”

He added that a three-track recording exists featuring Simmons and the Van Halen brothers doing ‘Christine Sixteen,’ ‘Love For Sale’ and ‘Tunnel Of Love,’ but that “it wasn’t a natural fit.”