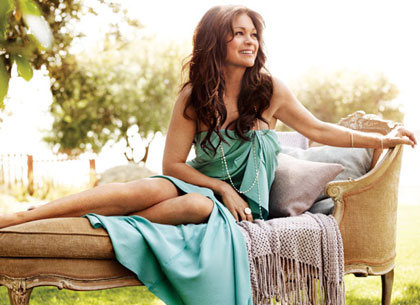 Valerie Bertinelli, the ex-wife of VAN HALEN guitarist Eddie Van Halen and the mother of the band’s bassist, Wolfgang Van Halen, says that the current VAN HALEN tour would not be taking place if her son hadn’t joined the group as the replacement for original VH bassist Michael Anthony.

According to Ultimate Classic Rock, the “Hot In Cleveland” actress told Drew Lane and Mike Clark of Detroit, Michigan’s WRIF 101.1 FM radio station, “Wolfie can definitely back up everything with his playing. You can’t deny that he is an excellent bass player and an excellent musician; his voice is amazing.”

Bertinelli also spoke about the criticism leveled at VAN HALEN over the fact that the Anthony is no longer involved with the group. “I loved Mike, too. I thought he was a really nice guy, still do,” she said. “But the only way this tour is happening is because Eddie gets to play with his son Wolfie. Otherwise, this tour wouldn’t be going on, it really wouldn’t. . . This brings joy to Ed, and that’s what he wants to do now — just have fun playing. As great as Mike is, this wouldn’t be happening if Mike was still in the band.” She added, “For any of the fans that are truly angry that Mike‘s not in the band… at least they get to see a version of the band. You’re getting to see Dave [Lee Roth] and Ed and Al [Van Halen] play together. I know I’m a little prejudiced but… my son kicks ass! And Ed‘s playing better than ever, you’ve gotta give him that.”

When asked about how her 21-year-old son is doing on the road, Bertinelli said, “He’s having the time of his life. I try to tell him not to read the Internet, but he reads some of the horrible things that people say. No matter what, they’re not going to be pleased. I try to tell him, ‘You’re not going to please everybody, it’s impossible.’ Especially people who are so passionate about this band. But he’s having such a great time. I think those naysayer voices are fading quickly in the back.”

Bertinelli and Van Halen‘s divorce was finalized in December 2007 after 26 years of marriage.