It’s been a bad week for controversial radio talk show host Rush Limbaugh. Following offensive comments he made after Georgetown law student Sandra Fluke’s testimony before Congress, more than 35 companies have pulled their advertising from his syndicated radio show. Earlier in the week, Peter Gabriel demanded that his songs not be used by Limbaugh, and now Rush has joined Gabriel.

After learning that the perpetually controversial Limbaugh played his namesake’s ‘The Spirit of Radio’ while demanding to see tapes of Fluke having sex, the attorney for the Canadian band, Robert Farmer, has sent a cease-and-desist letter to Limbaugh’s show.

This is not the first time Limbaugh’s use of music has gotten him in trouble. In 1999, Chrissie Hynde complained about his use of the Pretenders hit, ‘My City Was Gone’ as his theme song. However, Hynde allowed Limbaugh to play the song in exchange for a $100,000 donation to People for the Ethical Treatment of Animals and vocal support against chemical testing on animals. 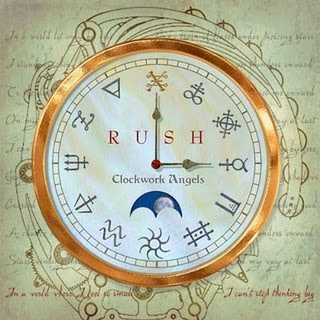 According to Amazon.com, RUSH‘s long-awaited new album, “Clockwork Angels”, will be released on May 29 in the U.S. via Roadrunner Records and in Canada through Anthem/Universal Music. The CD will be made available in Japan on May 23 via Warner Music.

Two songs from “Clockwork Angels” that were previously digitally released, “BU2B” and “Caravan”, were reportedly re-recorded for the forthcoming CD due to a record label change in the middle of the making of the album.

As previously reported, “Clockwork Angels” is being turned into a novel by Colorado-based sci-fi author Kevin J. Anderson, who wrote on Facebook, “Most of you are aware of my long-standing friendship with (RUSH drummer) Neil Peart . . . For more than twenty years, Neil and I have wanted to collaborate on something MAJOR, a way we could tie together our imaginations, and at last that’s happening. I’m writing the novelization of RUSH‘s forthcoming album, ‘Clockwork Angels’.”

Anderson added that he worked with Peart to “flesh out the epic story told over the course of the music,” which involves “lost cities, pirates, anarchists, exotic carnivals, and a rigid Watchmaker who imposes precision on every aspect of daily life.” More details will be coming.

Note: Artwork below is **NOT** the official “Clockwork Angels” cover.