ROB ZOMBIE AND MEGADETH TO TOUR TOGETHER!

Metal heavyweights ROB ZOMBIE and MEGADETH have just announced a co-headlining tour guaranteed to raise the temperature on the planet. The trek, which marks the first time the two bands have toured together, kicks off Friday, May 11 in Holmdel, New JerseyJ and encompasses high-profile appearances at several rock festivals, including M3 Rock Festival, Rock On The Range and wraps Saturday, May 26 at Rocklahoma. ROB ZOMBIE will headline Rocklahoma, co-headline Rock On The Range (with INCUBUS), and will close all shows on the MEGADETH dates. A complete list of dates is below. 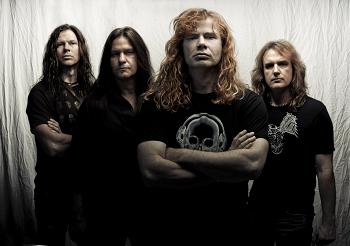 This will be ROB ZOMBIE‘s first concert tour since last summer’s “Hell On Earth” co-headline trek with SLAYER. Zombie spent last fall and winter shooting his sixth feature film, “The Lords of Salem” which he wrote and directed and is making with the producers of the “Paranormal Activity” franchise. With principal photography completed, the film is currently in post-production.

Never one to play it safe, Zombie — with guitarist John 5, bassist Piggy D and Ginger Fish on drums — will bring his legendary stage show out in full force on these dates. Audiences will get what they expect from a ROB ZOMBIE show — an amped-up, non-stop barrage of sin, sex and Satan guaranteed to rip your face off, a true rock and roll spectacle at its finest.

Check out ROB ZOMBIE and MEGADETH in the following cities:

MEGADETH was among the nominees for the 54th annual Grammy Awards, which was held on February 12 at Staples Center in Los Angeles. The band’s tenth Grammy nomination was for its new single, “Public Enemy No. 1”, off MEGADETH‘s latest album, “TH1RT3EN”, which came out on November 1, 2011.

“Public Enemy No. 1” actually marked the second Grammy nomination for music from “TH1RT3EN”, as the song “Sudden Death” was first unveiled in the 2010 video game “Guitar Hero: Warriors of Rock” and received a “Best Metal Performance” nod.