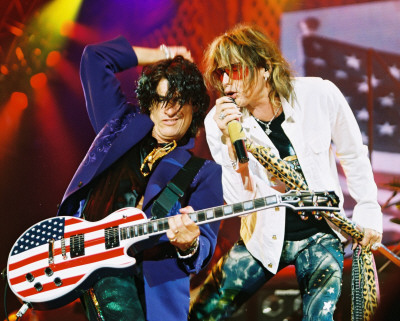 Aerosmith guitarist Joe Perry has revealed that the band will indeed tour in 2012, but not until after frontman Steven Tyler finishes up his duties as ‘American Idol‘ judge. “AEROSMITH U.S. TOUR STARTS IN JUNE! tickets on sale in March,” Perry tweeted on Monday night.

Nothing else about the tour — including dates, venues, opening acts and length — has been revealed. It seems like the run could sync up nicely with the new Aerosmith album, which Perry recently said “has a feel like some of the early stuff” because they’re once again working with producer Jack Douglas ( who worked with the band on ‘Toys in the Attic,’ ‘Rocks’ and more).

“We’ve tried to bring that back,” Perry says. “People are always asking for something that sounds like the old stuff, but you can’t rewrite ’Mama Kin’ or ’Same Old Song And Dance.’ All you can do is start from the same place you started when you made those records.”

It may be too early to make predictions, but it seems like taking advantage of America’s biggest stage to release a new single would make sense for the rockers. Wouldn’t a performance during the ‘American Idol’ finale make a lot of sense?

It certainly would be a great chance to familiarize viewers with the band’s new product and touring schedule, if any tickets are still available in late May.