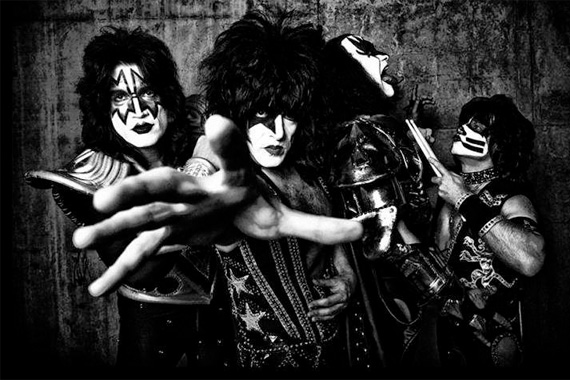 They went 11 years between their last two albums, but something must have sparked creatively for Kiss when they made ‘Sonic Boom’ in 2009, because they’ve already finished recording their next release — and it sounds like it’s going to be a ‘Monster.’ What do we know about the 20th Kiss studio album, and when can we expect to hear it? Let’s take a look at what the band has told us so far.

Gene Simmons started talking about ‘Monster’ last March, when he told the hosts of ‘Heavy Metal Thunder’ that fans can expect to hear “straight rock songs, no ballads, no keyboards, no nothing, just rock” and said, “A lot of the songs [have been] written by the whole band together, so no outside writers, just the band doing what it did on the first three records — writing the songs ourselves.” He also boasted of a wealth of material, saying, “We have almost all the songs written. In fact, we have too many songs; we have about 20 to 25 things that look and sound good.”

In April, Simmons sat down for a chat with UGO and said the band was already “knee deep” in preparations for what he described as “meat and potatoes” Kiss. Describing the sound of the album as “‘Destroyer’ meets ‘Sonic Boom’ meets ‘Revenge,’” Simmons promised “You know, it’s going to be like Santa Claus. Up and down, everybody gets used to this and that, and things change, and fashion changes, but it’s good to know that Santa comes, and he’s not going to change his outfit and you know what you’re going to get: gifts. Consistency of message.”

In July, guitarist Tommy Thayer added his two cents, saying that “The idea was to create a classic Kiss record going back to the roots of the early records and really try and capture that vibe. I think we did and then some.”

Simmons kept talking in November, telling Mojo that the band opted for a simple approach to recording the new songs. “Technology is a seductive bitch, she will seduce you,” he asserted. “You press this button, you don’t have to do anything. But analog is the love of your life. You can push real hard and it always gives back. For the new album, the actual recording process was 24-track tape and an old [analog] Trident board. And as many tubes as possible. You need tubes, electricity and thick wood to make that thick sound.”

Finally, Paul Stanley weighed in recently, announcing that the band had finished mixing ‘Monster.’ Saying they cut 14 tracks for the record, he described the recording process by saying, “The band’s all there, all the time, and we cut the tracks all facing each other in the same room. Chemistry and camaraderie, that’s essential. That’s what made ‘Sonic Boom’ so great and this album is thunderously better.”

Added Stanley, “Listening to the tracks back to back is like sensory overload. Everyone who has heard any of it is completely blown away. Powerful, heavy, melodic and epic.”

According to the Kiss Wikipedia page (not always the most reliable source, but we’ll take it), the following eight songs are confirmed for the ‘Monster’ track listing:

‘Hell or Hallelujah’ ‘Born to Be a Sinner’ ‘Out of This World’ (Written by/to be sung by Tommy Thayer) ‘Are You Ready?’ (Written by Simmons) ‘Wall of Sound’ ‘It’s a Long Way Down’ ‘Back to the Stone Age’ ‘Shout Mercy’

We haven’t seen an official release date yet, but that same Wikipedia entry says we should expect to hear the end result of all this rocking in May or June. Think you can wait that long, Kiss Army?