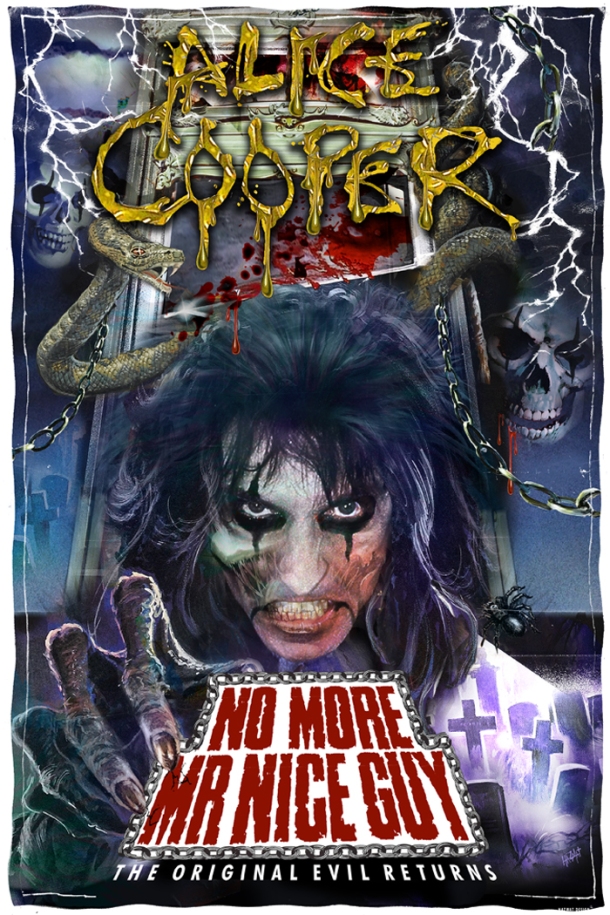 NME TV recently conducted an interview with legendary rocker Alice Cooper. You can now watch the chat below.

When asked for his thoughts on “Lulu”, METALLICA‘s collaborative album with former THE VELVET UNDERGROUND frontman Lou Reed, Alice said, “It’s such an odd combination that I really wanna hear it, because I love Lou Reed and I love METALLICA. I would like to have been a fly on the wall when somebody said, ‘Why doesn’t Lou Reed and METALLICA get together and make an album?’ ‘Cause I would have gone, ‘What?’ It’s like Iggy Pop making a record with ABBA. You’re sitting there going, ‘Where’s the connection here?’ [Laughs] So I really wanna hear it. Lou Reed‘s lyrics are as dark as can be. And METALLICA is this gigantic, steroid metal band. How does this gel? I can’t wait to hear it.”

Recorded with longtime collaborator Bob Ezrin, who produced the original multi-platinum “Welcome To My Nightmare” album in 1975, “Welcome 2 My Nightmare” picks up right where they left off, with Alice trapped in his own warped mind.

“After a long day of sunburns and drought out in the desert, [I was] glad to be done fighting scorpions for the filming of ‘Electric Eye’,” said AS I LAY DYING vocalist Tim Lambesis. “We came out victorious, but we probably couldn’t have done it without the classic metal inspiration of Halford and PRIEST’s legendary guitar melodies.”

AS I LAY DYING‘s version of “Electric Eye” is featured on the band’s latest release, the “Decas” EP — a collection of new tracks, covers, remixes
and more — which sold 9,500 copies in the United States in its first week of release to debut at position No. 61 on The Billboard 200 chart. The effort
reached No. 2 on the iTunes Rock chart.
iTunes also offered a free track (“Paralyzed”), which was downloaded by a staggering 125,000 people in one week.

Meant to tide fans over until the release of the band’s hotly anticipated new studio LP (due for release next year), the “Decas” EP marks AS I LAY DYING‘s decade of making music and features three new songs, three cover songs, remixes, and more.

Commented AS I LAY DYING vocalist Tim Lambesis: “We wanted to at least do an EP when the idea first came up. We were touring at the time and knew we wouldn’t have time to put together an entire album of new material.

“‘Decas’ literally means ten, and to me it is a collection of songs to celebrate our ten-year anniversary as a band.

“We were able to round up three new songs that we felt represented the different sides to our band. There’s a song you’d generally expect from us, one on the heavier side, and then one of the most melodic songs we’ve ever done. We took a similar approach on the cover songs. We wanted one song that represented a thrashier, heavier influence.

“Interestingly enough, we were asked to do a SLAYER cover song with an anti-war theme for a video game months earlier, so that worked out perfectly. Next, we represented the melodic guitar influence with JUDAS PRIEST who is responsible for starting much of that within metal. Lastly, I came up with the idea to do a simple, raw, energetic song that was outside of our genre but still influential in some of our musical upbringing.”

AS I LAY DYING will kick off its “A Decade of Destruction” headlining tour on November 30 with special guests OF MICE AND MEN, THE GHOST INSIDE, IWRESTLEDABEARONCE and SYLOSIS.