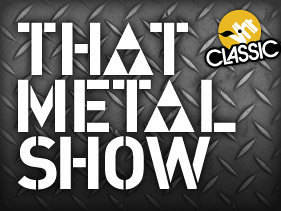 GUNS N’ ROSES singer and sole original member Axl Rose taped an hour-long interview with VH1‘s “That Metal Show” following the
band’s show in Miami on October 29, the second of its newly launched U.S. tour. The talk will air on Friday, November 11 as part of VH1 Classic‘s “National Metal Day” and will also include a live performance of “Live And Let Die” from the Florida concert.

After Trunk told Axl that he was impressed with the singer’s performance throughout the three-hour set, calling Rose‘s vocals flawless and “spot on,” Rose responded by saying, “I had a good night. It’s not an anomaly, but I did have a good night, and I have been taking care of my voice. I do warm-ups before the show, I do warm-downs after the show, I do those religiously.”

Trunk also spoke about other vocalists who painted themselves into a corner by singing classic songs in a higher register and then having to perform them live 20 or 30 years later. “I did that with ‘You Could Be Mine’,” Axl admitted, before adding that “The first time I had to
play that live, I was like, ‘What did I do? What have I done, I have to sing this live now!'”

Rose was reportedly asked during the session about the band’s possible induction into the Rock And Roll Hall Of Fame, the chances of hearing new music, his notorious lateness at concerts, the current GUNS lineup and more.

Rose also announced that LOADED, the band led by former GUNS bassist Duff McKagan, will open some shows on the current road trip.

GUNS N’ ROSES reportedly did not hit the stage until midnight in Miami, keeping fans waiting for two hours after openers BUCKCHERRY finished their set. GUNS finished their show at three in the morning and the interview took place at approximately 5:30 a.m.

The reclusive, eccentric Rose has not given a major interview to a radio or TV outlet in five years or more.