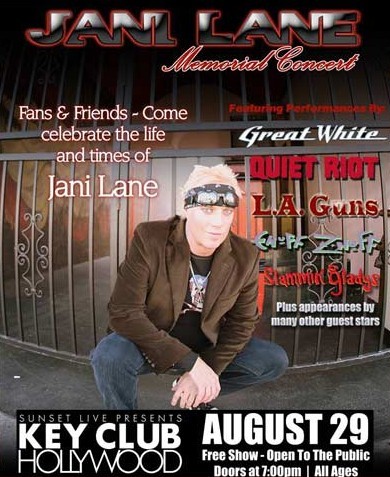 An autopsy performed on August 12 on Lane proved inconclusive pending the results of toxicology tests, according to the Los Angeles County coroner’s office.

Assistant Chief Coroner Ed Winter says it may take seven or eight weeks to finalize the cause of death.

Investigators found a half-empty bottle of vodka and prescription medication in the hotel room where Lane was found dead on August 11, according to TMZ.com.

Lane was pronounced dead by Fire Department personnel who responded to a call shortly before 5:30 p.m. in the Comfort Inn in the 20100 block of Ventura Boulevard in Woodland Hills, California, the Los Angeles Police Department said.

“He was one of the great rock-and-roll frontmen and singers of all time,” Jani‘s manager and longtime friend Obi Steinman said. “His music helped shape the ’80s.”

Lane had battled alcoholism for years and also had a history of alcohol-related arrests. The singer’s sister, Vicky Oswald-Ley, told RadarOnline.com that the death of their mother seven years ago affected Lane‘s battles against alcohol. “She would always talk him into going into rehab and hospitals,” she said. “I think when she passed, that desire to stay healthy died too.”

“He finally succumbed to that,” Steinman said. “He lost his battle over alcohol.”