CONTENDER TO FIRST METAL SONG EVER? 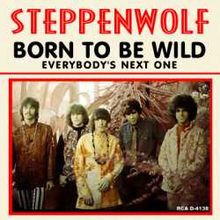 In my initial RETRO-REPLAY post I followed the conventional wisdom that IN-A-GADDA-DA-VIDA from IRON BUTTERFLY is the very first metal song.

This week I’d like to argue for contender #1: STEPPENWOLF’S BORN TO BE WILD.

“Born to Be Wild” was written by Mars Bonfire (who also wrote several other songs for Steppenwolf) as a slow ballad. Writer Bonfire was previously a member of the Sparrows, the predecessor band to Steppenwolf, and his brother was Steppenwolf’s drummer. Although he initially offered the song to other bands — The Human Expression, for one — Born to Be Wild was first recorded in 1967 by Steppenwolf in a sped-up and rearranged version, that the All Music Guide’s Hal Horowitz described as “a roaring anthem of turbo-charged riff rock” and “a timeless radio classic as well as a slice of ’60s revolt that at once defines Steppenwolf’s sound and provided them with their shot at AM immortality.” 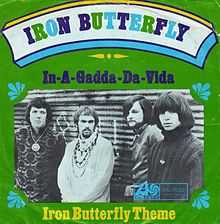 was named the 24th greatest hard rock song of all time by VH1.

So, BORN TO BE WILD was first, but was it Heavy Metal? If it was indeed heavy metal and not hard rock, is it still heavy metal? Because I believe true heavy metal is unmalleable and can’t be dethroned as a metal tune.

In my humble, but experienced opinion, STEPPENWOLF’S BORN TO BE WILD having been so co-opted by Classic Rock and even Oldies radio formats over the years and such a massive piece of popular culture in movies, TV, and advertising if it ever could have laid claim to being a Heavy Metal song, it has since lost that claim.

A Heavy Metal song not only needs to be rebellious, which BORN TO BE WILD, most certainly is, and non-conformist, which it is too, and non-mainstream, which it once may have been but no longer is.

Therefore, it’s just a Hard Rock song. It has lost it’s Metal Edge because it has become too mainstream.

IN-A-GADDA-DA-VIDA hasn’t been corrupted in such a way so, it remains to me, the original, undiluted champion as the first Heavy Metal song ever.

Disagree? Send me your comments. I’d love to argue with you!

Oh…and here is BORN TO BE WILD…cause I know ya wanna hear it now.

STEPPENWOLF – BORN TO BE WILD